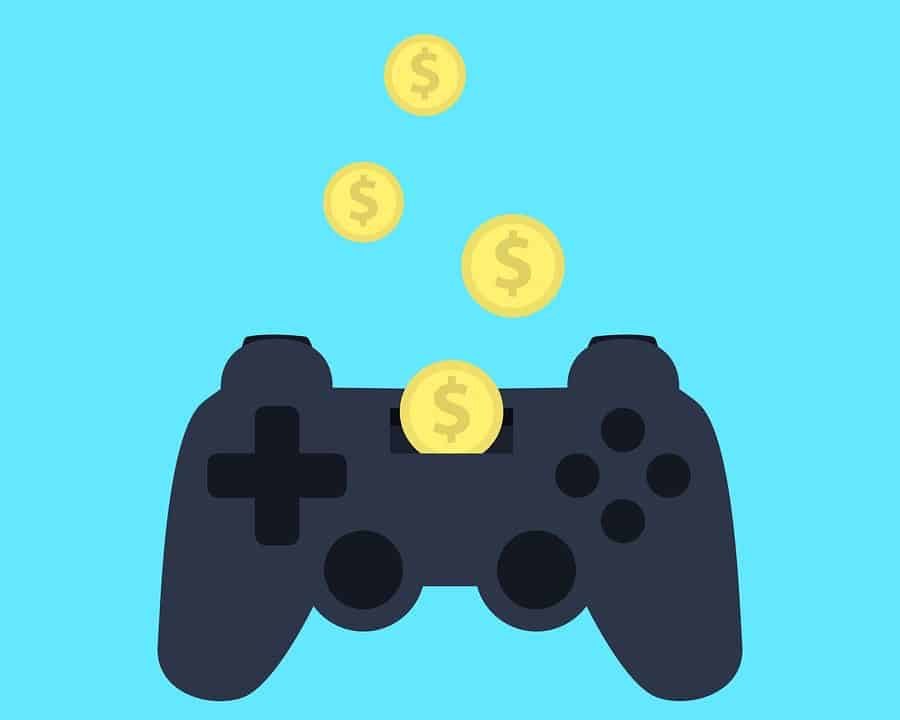 For as long as I can remember, people have bemoaned the ever-accelerating consolidation of the video game industry. For much of the past two decades, small-to-mid-size game developers have been going bust as industry behemoths like EA grow ever more dominant. For those who have followed the industry, it’s an ever-present trend and one that is not likely to abate anytime soon.

However, the second decade of the twenty-first century has given rise to a phenomenon that could be seen as a countervailing force to this trend; a social media-powered boat, gamely pushing upstream against The Market’s unloved current. Crowdfunding pools the resources of those who want a piece of the next big thing, delivering grassroots funding to projects that would otherwise struggle to get funding.

Anyone with a cursory familiarity with crowdfunding could tell you what Kickstarter (see our review) and GoFundMe (see our review) are, but lesser-known specialty crowdfunders continue to pop up, catering to the particulars of individual industries.

Enter Fig. Launched in 2015 in San Francisco, Fig is a platform on which independent game developers and mid-size game studios can get video games crowdfunded. However, Fig is more than just a “Kickstarter for Video Games.”

It’s a unique crowdfunding system and one that presents unique challenges to those looking to use crowdfunding to finance their gaming dreams. Let’s go through what you need to know before using Fig’s crowdfunding platform for game developers.

Actually, I lied. The backer also has a third option: back both!

I said in the introduction that Fig wasn’t just “Kickstarter for video games.” However, if you’re not trying to raise six or seven digits’ worth or capital, you can, in fact, treat Fig as if it were Kickstarter and just run a rewards crowdfunding campaign. Describe/show off your cool game, offer various rewards for different tiers of support, and hope to raise your goal within your funding period.

However, most Fig campaigners opt to run both a rewards campaign and an equity campaign concurrently. This way, you can attract support from the more casual backer who may want to see your game produced and ultimately receive a copy, as well as the investor who sees profit potential in your game idea and wants to support it in exchange for a cut of future sales.

Check out the campaign page for Pig Eat Ball if you want to see what Fig’s unique brand of rewards/equity hybrid crowdfunding looks like in action. 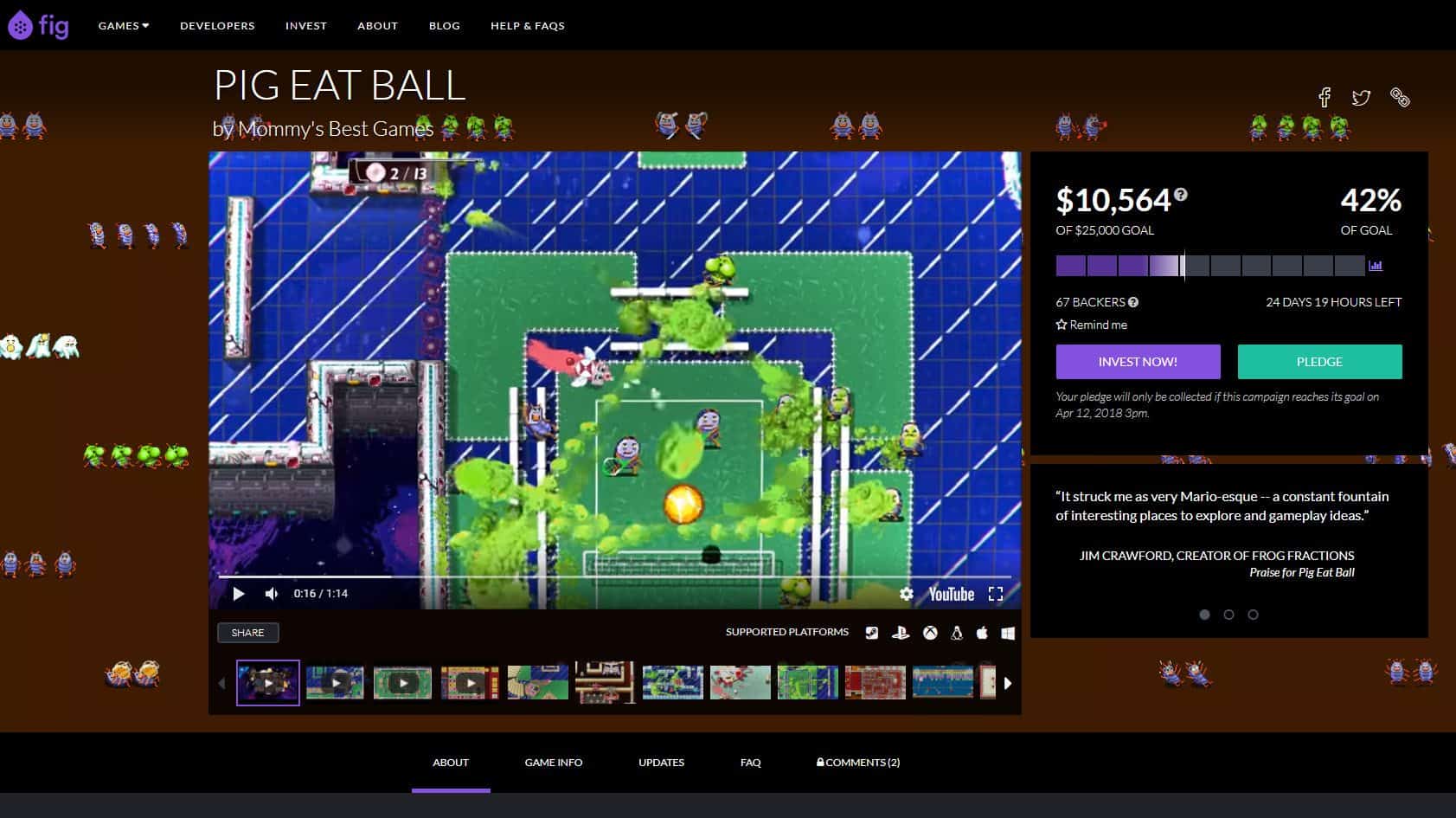 Some crowdfunding platforms allow anybody who signs up and creates a profile to launch a crowdfunding campaign on their platform. Not Fig. According to the company, when a developer applies to use the platform:

Also note that Fig only hosts one or two new funding campaigns per month. When considering whether to send your pitch to Fig, determine whether you can afford to, in effect, wait in line for your chance to be featured on the site.

Not so with Fig. Launch a Fig crowdfunding campaign, and you’ll have to meet or exceed your funding goal before you can collect. Fail to reach your funding goal, and you’ll get nothing at all. This goes for both rewards and equity campaigns. You’ll want to have done your due diligence before launching your campaign with Fig, as an 80% funded project will see you get 0% of the cash.

Launch an equity crowdfunding campaign with Fig and you won’t have to worry about investors owning a portion of your intellectual property. That’s because with Fig’s unique equity crowdfunding system, the investor invests in stock created by Fig to pay dividends based on the sales receipts from the game post-release. Fig describes the system like so:

Developers maintain 100% creative control and IP ownership over their game. The community invests in Fig Game Shares, which pay out based on Fig’s own revenue share gained through a licensing agreement with the developer, and Fig takes on the accounting and legal risk associated with the investments as it’s our stock. Developers are not involved in selling investments, nor are investors investing in studios or IP.

Here’s where you can learn more about Fig Game Shares. Essentially, they allow you to retain full ownership of your company and its products while offering investors the chance to profit from your future game sales commensurate with the proportion of Fig Game Shares they purchased.

If you’re using Fig as if it were Kickstarter and just want to run a rewards campaign, there’s one way in which Fig is actually superior to Kickstarter. Let me explain.

Fig, however, does things differently. Launch a rewards campaign with Fig and you won’t pay any platform fees. You will only have to pay credit card processing fees. These will come out to about 2.5% of what you raise. If you’re an independent game publisher looking to use rewards crowdfunding to get your project started, this factor alone gives Fig a leg up on the competition.

For Fig’s equity crowdfunding campaigns, the company states the following:

If and only if the campaign succeeds, a portion of Fig’s out-of-pocket legal and accounting transaction costs will be deducted from the investment proceeds (up to 5%).

7) Fig Can Publish Your Game As Well

Fig states the following regarding its publishing services:

Fig’s publishing services can be opted into — you are not required to use them to publish your game.

Is your video game idea still in its embryonic stage? Is it unworthy of being seen by the general public at this point? You might want to consider running a private funding campaign before you run a public one.

Fig’s Backstage Pass Program lets you do exactly this. Through this program, Fig’s most hyper-attuned backers can evaluate your campaign away from the prying eyes of the public and give you valuable feedback, all while you start the fundraising process, getting a head-start on your public crowdfunding campaign.

Here’s a disclaimer I’ve started attaching to everything I write related to equity crowdfunding:

Bear in mind that equity crowdfunding is a still-evolving field, with the full impact of the JOBS Act still being assessed. Equity crowdfunding is a more complex proposition than, say, rewards-based crowdfunding, as investing is much more substantially regulated. Consult an attorney if you have any legal questions regarding the process, SEC regulations, taxes, etc.

No form of popular entertainment inspires as much passionate devotion (among other things) as does the video game. For those looking to get in on the ground floor of the industry, crowdfunding is a way you can fund your passion projects while a) retaining control of your work, and b) not going into debt.

Fig’s particular brand of video game crowdfunding gives independent developers and game studios alike the ability to fund their work by monetizing the all-consuming devotion of video game fans. Just make sure you know the essentials before you embark on your crowdfunding journey.