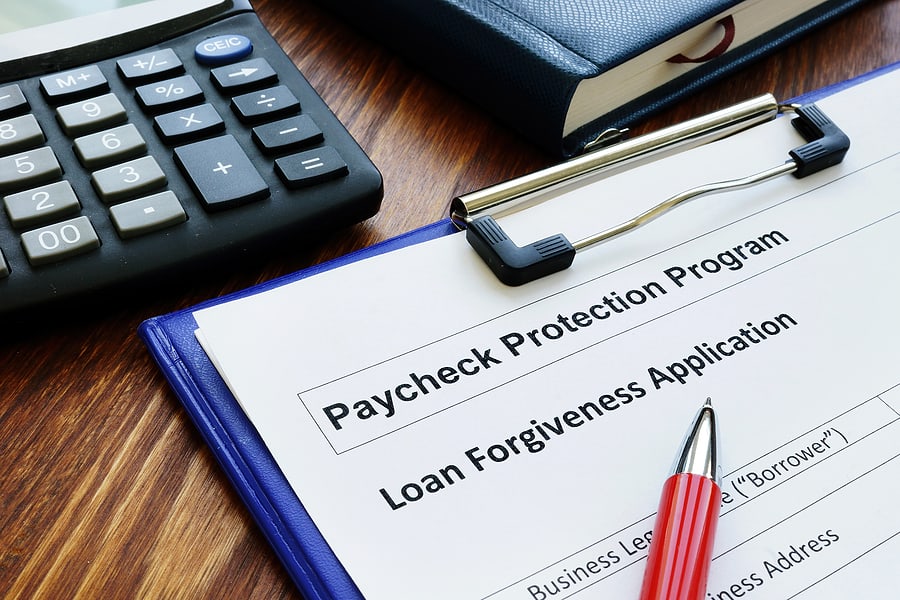 If lawmakers, small business advocates, and financial institutions get their way, small businesses that have become saddled with Paycheck Protection Program (PPP) loan debt may be able to receive automatic forgiveness soon.

According to data from the Small Business Administration (SBA), the $150k cutoff represents 86% of the over 4.9 million businesses that took out loans via the PPP. However, those businesses under the $150k threshold only received 27% of the total money administered through the PPP.

Proponents of the bill argue that it would be a time saver for small businesses, as their paperwork needs would drop. Some also suggest that blanketed forgiveness could alleviate the workload for the banks that have processed PPP applications.

In their announcement introducing the Forgiveness Act, the sponsoring senators specifically estimated that automatic forgiveness could retain $2,000 for each affected small business and $500 per loan for the lenders — ultimately saving roughly $9.4 billion in total.

“We can avoid the burdensome cost of superfluous bureaucracy required to arrive at the foregone conclusion of loan forgiveness by implementing a few commonsense changes,” Cramer said in a statement. “The Paycheck Protection Small Business Forgiveness Act would give small businesses peace of mind by eliminating unnecessary bureaucratic requirements and simplifying the process for forgiving smaller loans.”

The bill — or variants of it, at least — has received support from numerous parties beyond Capitol Hill.

Perhaps most notably is Steven Mnuchin, the Secretary of the Treasury. While Mnuchin hasn’t thrown his weight behind the introduced bill specifically, he has suggested the need for automatic forgiveness.

“One of the things we’ll talk about is should we just have forgiveness for all the small loans? I think that’s something we should consider,” Mnuchin said during a House Small Business Committee hearing on July 17.

Organizations have also chimed in their support. For instance, over 130 trade associations sent a letter to Congress on July 9 urging for passage of the bill. Among the letter’s cosigners included the US Chamber of Commerce, the International Franchise Association, and the National Restaurant Association.

In a July 17 letter, the American Bankers Association, the Bank Policy Institute, and the Consumer Bankers Association pleaded with Mnuchin and SBA head Jovita Carranza for automatic PPP loan forgiveness of up to at least $150,000 and as much as $350,000.

Most recently, the online payments giant PayPal — which has been processing PPP applications for the SBA — joined the throng of voices urging for forgiveness on PPP loans under $150k.

“As Congress considers proposals for automatic loan forgiveness for PPP loans below a certain dollar amount, we feel it is in our small business customers’ best interest to ensure their voices are heard with their representatives regarding the loan forgiveness process,” PayPal’s Senior Vice President of Global Credit Doug Bland told the Washington Business Journal via email.

However, not everyone is on board with a blanket forgiveness bill.

A chief concern is fraud. Currently, the SBA has refused to reveal the companies that received PPP loans under $150k. Instead, the SBA has only shared the names of those businesses that took out larger PPP loans.

“Thus, there is absolutely the potential for waste and fraud when awarding and later forgiving these loans — businesses that don’t need assistance receiving essentially free taxpayer money, but more importantly, our smallest, most vulnerable businesses being prevented from getting the help they need.”

Liz Hempowicz, the director of public policy for The Project on Government Oversight, added (per Politico) that “we should see the names of [the smaller] borrowers before we talk about automatic loan forgiveness.”

Another critique stems from the idea that automatic forgiveness goes beyond the original intent of the PPP.

“The program is the Paycheck Protection Act to protect payroll and to protect workers,” Sen. Ben Cardin, D-Md., said in an interview with the Washington Business Journal. “To give a blanket forgiveness without even requiring the verification of how the money was spent, to me, goes beyond the extent of the bill.”

Currently, PPP forgiveness is a wonky mess. And, according to a survey by the Consumer Bankers Association, only 20% of banks have begun accepting forgiveness applications.

At the time of writing, all businesses that received PPP funding must hit a number of requirements before receiving forgiveness. These requirements include:

For a more detailed look at the PPP’s forgiveness rules, read Merchant Maverick’s in-depth article on the topic.