The Great Coin Shortage Of 2020 Threatens Small Businesses Across America 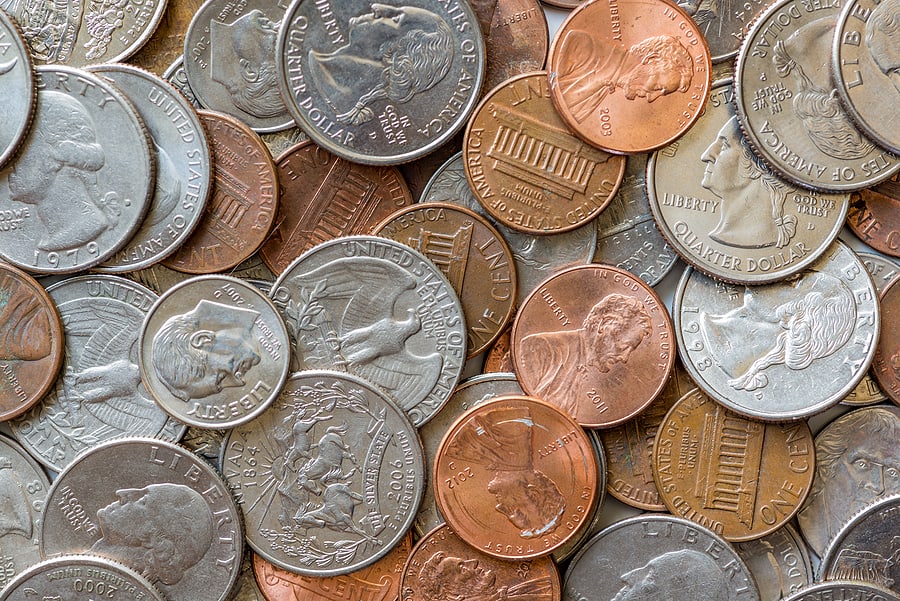 If you had “Coin Shortage” on your 2020 bingo sheet, you can check that box and keep on hunting for other unique or unexpected consequences of this year’s coronavirus pandemic. A perfect storm between closed coin production and a decrease in moving coins through the banking systems has resulted in a coin shortage, and some small businesses are already feeling the impact.

Last month, the Federal Reserve issued a statement on the coin shortage, with Jerome Powell telling Congress: “What’s happened is — with the partial closure of the economy — the flow of coins through the economy has … kind of stopped. The places where you’d go to your coins and get credit … those have not been working.”

Coins Are Stuck In A Stopped System

Treasury Secretary Steve Mnuchin said in a virtual investment summit, “As it relates to coins, so many businesses shut down, a lot of coins got stuck in the system, so we are a little bit far behind on coins.”

There are several reasons why the COVID-19 pandemic has resulted in coins becoming stuck in the system. One is that on advice from the Centers for Disease Control (CDC), many small businesses stopped accepting cash in an attempt to slow the spread of the virus. The shift to cashless transactions and contactless payment systems resulted in fewer coins moving through the system.

With fewer coins going to the bank, banks cannot move coins back out into circulation. The Federal Reserve Task Force, started June 30, is expected to report on their suggestions to mitigate the shortage in early August. According to the Task Force:

“The primary issue with coin is a dramatic deceleration of coin circulation through the supply chain … While there is adequate coin in the economy, the slowed pace of circulation has meant that sufficient quantities of coin are not readily available where needed.”

Decreased circulation has been accompanied by decreased coin output, as the U.S. Mint has dramatically slowed output in an attempt to protect its employees from contracting the virus.

Grocery stores, car washes, laundromats, convenience stores, dispensaries, vending machines, and gas stations are all businesses that depend on coins. Some of those businesses are still running as cash-only businesses in a credit world. Underbanked and smaller businesses are most at risk of being disproportionately affected by a cash shortage.

This also affects underbanked households who primarily pay with cash. According to an FDIC survey in 2017, 8.4 million households in the United States do not have a banking account of any type. If places are not accepting cash or offering change, or if businesses lose their ability to give change, the impact is greater among these households and cash-only businesses.

In non-COVID days, small businesses could easily receive change from their local banks. However, as some businesses stopped accepting cash and the U.S. Mint slowed production, fewer coins have found their way back to banks. (Third-party coin systems like Coinstar — which banks depend on for coin circulation — have also experienced fewer deposits since March.)

Many small businesses have resorted to rationing their coins. Jeff Lenard from the National Association of Convenience stores told CBS News that, “Right now cash is a problem. [Small businesses] are only being given a fraction of what they normally get in terms of coin.”

Part of the Federal Reserve’s coin task force mission is to safely increase production, but even that might not mean a quick-fix. According to an interview with the Las Vegas Review Journal, Ted Rossman, an industry analyst with CreditCards.com said, “The mint … is working overtime to try to pump more coins into the system … I’ve seen some projections as far out as November.” Rossman, however, thinks that things will look better sooner than that.

In the meantime, some small businesses are asking for coins from customers, and other places are buying coins. Whether those coins actually get into the hands of the small business owners that need them, however, is a different issue.

Yiming Ma, an assistant professor of finance at Columbia Business School, said in an interview with Forbes that the Federal Reserve can’t just flood the economy with coins and hope for the best.

“It’s not a one day and everything is solved type of problem. We should be thinking about how to allocate distribution so it’s taken back in a way to help communities and businesses that are in the most need of coins. It’s easier said than done.”

How Your Small Business Can Respond To The Coin Shortage

If your small business doesn’t need coins to survive, you should help distribute the coins you receive back to your local banks or into local cash-only businesses.

If you are a small business that relies on coins, however, don’t hesitate to put out a “Coin APB” into the world and on your social media feeds. Most of the coins that typically run through our economy are languishing in piggy banks and sofa cushions. Skip the bank and go straight to the community to see if you can nudge some of those coins back into circulation.

For other COVID-19 related coverage, check out Merchant Maverick’s Coronavirus Hub for more articles about how to navigate the pandemic.