Home » Blog » News » Forget The Euro: Community Currencies Are Stronger Than The US Dollar

Forget The Euro: Community Currencies Are Stronger Than The US Dollar 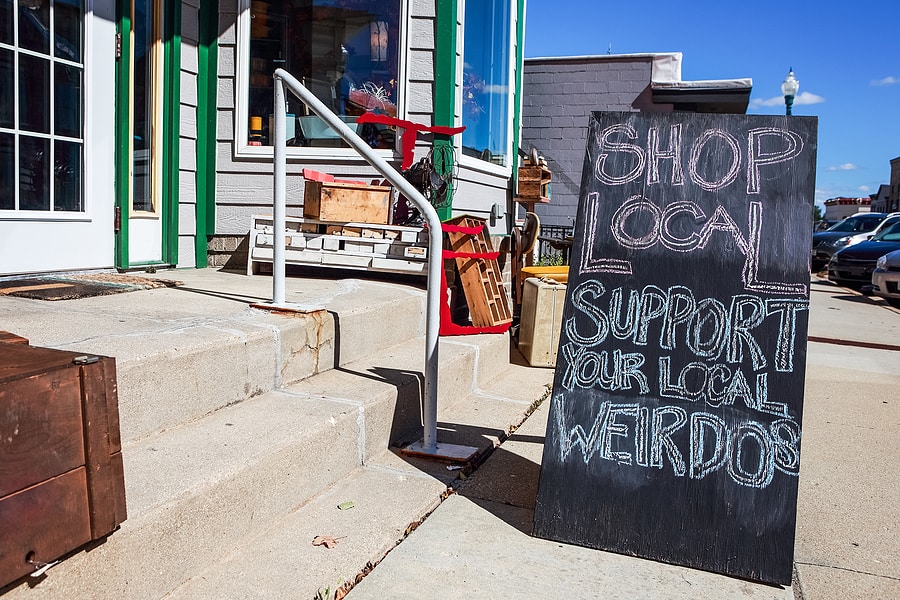 One small town in Washington has flipped an old adage on its head: Here, money does grow on trees.

This twist was spurred on by the recession generated by COVID-19. With little economic movement happening in its town of 2,000, Tenino, Wash. began printing wooden dollars.

These dollars aren’t legal US tender, but they are backed by the town’s general fund. These wooden bucks have become so successful that roughly 200 businesses in and around Tenino accept the new form of currency.

While other communities may not be circulating wooden money, Tenino’s local currency isn’t alone in the wake of the pandemic.

In southern Italy, the small town of Castellino del Biferno began printing “Ducati” banknotes to help the community’s businesses after COVID-19 hit. According to euronews, the town’s 550 residents have spent thousands of the currency at local shops.

“We decided to mint money to make sure the local economy could withstand the impact of the situation,” Castellino del Biferno mayor Enrico Fratangelo said in April. “However small this economy may be, there are three or four businesses still open, without considering bars or pubs.”

And at least one other community has started its own currency due to COVID-19: Shiawassee County in Michigan has been using its ShiaCash program to help businesses stay afloat during these uncertain times.

“We’ve got a lot of people that work in the county that don’t live in the county,” Theresa Trecha, an owner of a local bowling alley in Shiawassee County, told MLive. “A lot of those folks, they work and then they go, and so in order to maybe get those people to take advantage a little bit of what the town has to offer — that’s a great way to do it.”

For many years, the US dollar has enjoyed success as the world’s currency.

In recent times, however, it has seen challenges from the Euro — the primary currency throughout most of Europe — and the Japanese yen. While local currencies won’t ever rival these global titans of monetary units (in fact, the US is pretty stringent on new currencies; for instance, you can’t use a private currency in an attempt to replace US dollars), they have seen some success at becoming more valuable than the US’ primary form of legal tender.

“We now have people from outside of our borders, so outside of the city, who are willing to pay more than the face value,” Tenino mayor Wayne Fournier told Radio New Zealand. “There are some people who are willing to offer seven times the face value of the currency that we’re printing, so our Tenino dollars are worth more than the US dollar right now in an exchange rate sense.”

Fournier further added in an interview with Fox Business that some businesses in the town are accepting 25 Tenino dollars for as much as $50 worth of goods.

According to the Schumacher Center for New Economics, an organization that has helped grow local currencies in the past, the main advantage of these alternative currencies is that they keep the money local. This in turn helps stabilize small businesses that may otherwise struggle to compete against larger chains. National currencies like the US dollar, meanwhile, can be spent within a community and then be moved outside of the local area. Additionally, these currencies can foster “stronger relationships” between local businesses and their neighboring citizens.

Community Currencies Are Nothing New

The concept of local currencies often gains steam during times of economic downturns. This is actually the second time Tenino has “printed” wooden money — the first was during the Great Depression in the early 1930s.

Tenino’s first go at a community currency was quite popular and it became something of a viral sensation. In fact, hoteliers as far away as Chicago and Eugene, Oregon even accepted the money in lieu of American dollars. The first iteration of the Tenino wooden was such a success that people continued making commemorative versions for tourists up until at least 2018.

Other communities in the past have also seen economical gains by implementing a local currency.

For instance, Berkshares have only risen in popularity since their introduction in 2006 in the Berkshire region of New England. Since inception, the currency has seen over 10 million of its own dollars go out into circulation — for a region of fewer than 25,000 people. Berkshares also net consumers a tidy savings — for every $100 in Berkshares someone spends, it only costs 95 US dollars.

Community currencies have also enjoyed success the world over. Just two years ago, the Varamedí launched in Spain. In England, the Brixton Pound has popularly aimed to keep money local in a South London district. There are also active community currencies in places like Japan, New Zealand, and Kenya.

Starting A Local Currency In Your Community

Starting a community currency is no easy task.

You’ll need to first get other organizations and businesses within your community on board. This means reaching out to your local government, chamber of congress, and other business owners. Once you have enough backing to get the ball rolling,

There are tools and organizations able to help, however. Complimentary Currency offers a platform (and an app) that communities can take advantage of to boost their economies. The Schumacher Center also runs its Local Currency Program, which could help get your ideas up and running.

If you find starting a community currency too daunting, there are other ways to help kick start your local economy. For instance, consider a gift card program like the Pay Forward Project in Seattle. Other communities have also found success with passport programs, such as the initiative ran in Gray, Maine.