Time To Get A Contactless Business Credit Card? Here’s How To Get Your Own Tap-To-Pay Card 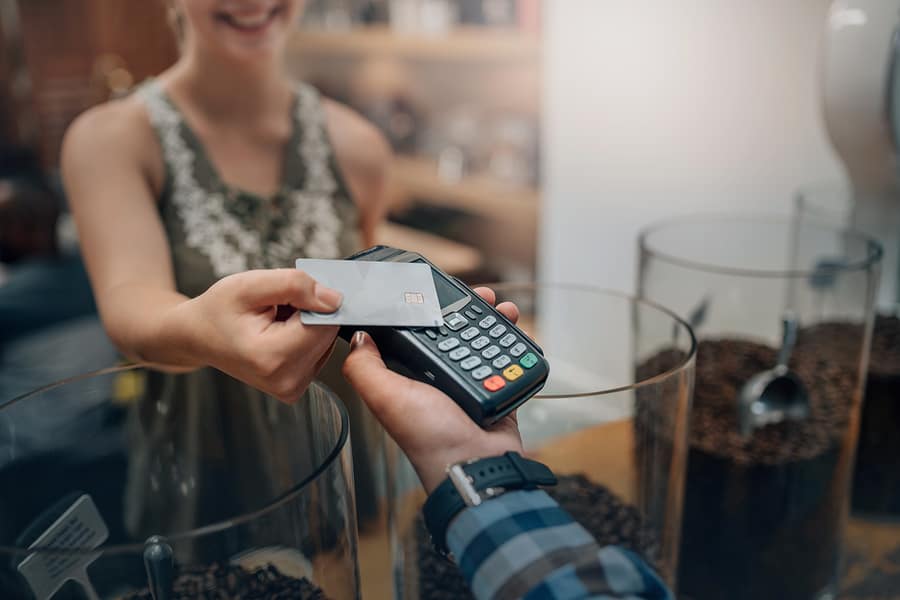 In some ways, the future is already here — at least in the world of credit card technology. Contactless payment enables you to simply tap your credit card to the payment terminal instead of swiping your card or sticking its chip into a reader. Because contactless credit cards reduce the touching of shared surfaces, such a payment method is both faster and — importantly, in the face of the COVID-19 pandemic — cleaner.

“Contactless offers consumers a safer, cleaner way to pay, speed at checkout, and more control over physical proximity at this critical time,” said the Head of Mastercard Acceptance Solutions, Blake Rosenthal, in response to the above-mentioned Mastercard survey.

Curious to learn if your business’ credit card is contactless-enabled? Want to know which issuers offer contactless credit cards? Then keep reading for the deets!

How To Check If Your Credit Card Is Contactless-Enabled

If you’ve received a credit card sometime in 2019 or later, then you’ve got a good chance that it’s contactless-enabled. Even if you have an older card, you still might have a bit of plastic that can be used just by tapping on the payment terminal.

To determine if your card can be used for tap-to-pay, just look for a four-bar wave-like symbol. You may notice that this wave symbol is similar in appearance to the Wi-Fi logo. The contactless symbol can usually be found somewhere on the back of your credit card.

Here’s an example of what the symbol looks like on the back of a credit card (to the left of the Visa logo): 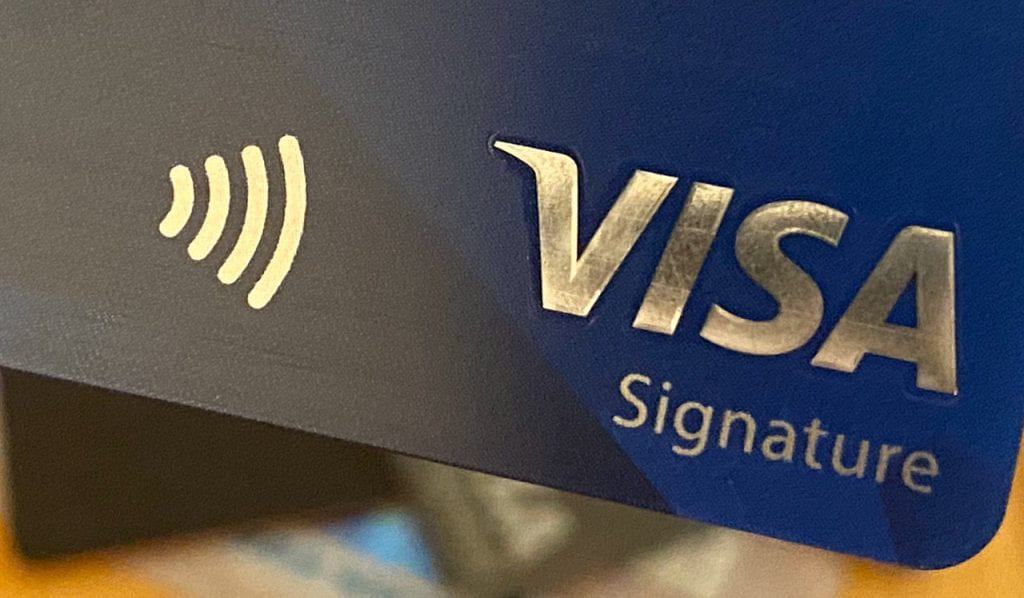 If your card doesn’t have this symbol, it probably isn’t contactless-enabled. Should this be the case for you, you’ll need to reach out to your issuer to request a contactless card. We’ve outlined methods for requesting contactless cards from popular issuers in the next section.

Note that not all merchants are set up to receive contactless credit cards. You’ll need to look for the wave symbol on the payment terminal when out shopping before you attempt to tap your card. If a payment terminal doesn’t have the symbol, you’ll need to swipe or insert the card to pay instead.

Once you’ve confirmed that you have a contactless-enabled card and the merchant you’re shopping at accepts contactless payments, simply hold your card up to the payment terminal. You just need to wait for a second or two for payment confirmation — which is usually displayed via either a beep or check-mark on the terminal screen — and then you’re good to go!

American Express began dabbling in the contactless card game way back in 2012, making the company a fairly early adopter. All of American Express’s small business credit cards are contactless-enabled as of July 2019. The Amex business card portfolio includes these products:

If you apply for any of the above cards and are approved, Amex will ship you a contactless version of the card.

Should you desire a contactless card before your next renewal date, Amex suggests visiting its website or the Amex Mobile app to request a new card that is contactless-enabled.

Bank of America started its contactless card push in June 2019 by issuing cards to customers in select pilot cities (specifically New York, Boston, and San Francisco). The bank has yet to formally announce a wider rollout of contactless cards.

Capital One’s foray into contactless cards kicked off in 2017 with the launch of the technology in the Quicksilver Cash, Venture Rewards, and VentureOne Rewards cards. While the bank does promote contactless cards as a faster way to pay, there are no details about which current Capital One products do or don’t offer contactless options.

If you find yourself with a Capital One credit card that isn’t contactless-enabled, we recommend calling the number on the back of your card to find out if replacing the card is an option. If you are in the market for a Capital One card, try reaching out to customer service to find out if the credit card you’re interested in offers contactless options.

In November 2018, Chase announced plans to roll out contactless cards across its product lineup. In the time that has followed, numerous Chase-issued credit cards have received a contactless facelift — over 20 of the company’s cards now include the feature.

Chase maintains a list of all its contactless cards on its website. Its stable of contactless business cards includes:

If you want to replace a Chase credit card in your wallet that isn’t contactless-enabled, visit Chase’s card replacement page.

Citi’s history with tap-to-pay cards started with the Costco Anywhere Visa Card receiving contactless technology in 2016. Since then, the bank has rolled the feature out to other cards within its brand. Citi currently offers two business-specific credit cards:

Note that while the AAdvantage card is confirmed to have contactless technology, Citi doesn’t market the Costco Business card as having it. However, the nearly-identical consumer cousin of the Costco card does support contactless payments, so it is likely safe to assume the business version does as well (although your mileage may ultimately vary).

If you have a Citi-issued credit card without contactless technology support, we suggest that you dial the number on the back of your card. Once you reach customer service, ask if you can have the card replaced with a contactless-enabled version.

If your current credit card isn’t contactless-enabled, you may still be able to take advantage of contactless technology when checking out. Both Android and iOS have their own solutions utilizing NFC for mobile phone users. Let’s take a look at what they are:

Apple introduced Apple Pay in 2014. This service allows you to attach an eligible credit card to the Wallet App on your iPhone. Once set up, you’ll be able to pay for purchases using your iPhone or Apple Watch at merchants who accept contactless payments.

For more information on Apple Pay, including how to set it up with your credit card, visit Apple’s website.

To combat Apple Pay, Google released Android Pay in 2015 and then later rebranded the service as Google Pay in 2018. Similar to Apple Pay, you can add an eligible credit card to the Google Pay app on your compatible Android phone. Once you’re all squared away, you can use your NFC-equipped phone (or compatible smartwatch) to place payments at the checkout counter of merchants who are set up for contactless payments.

For a deeper diver on Google Pay, visit Google’s website. 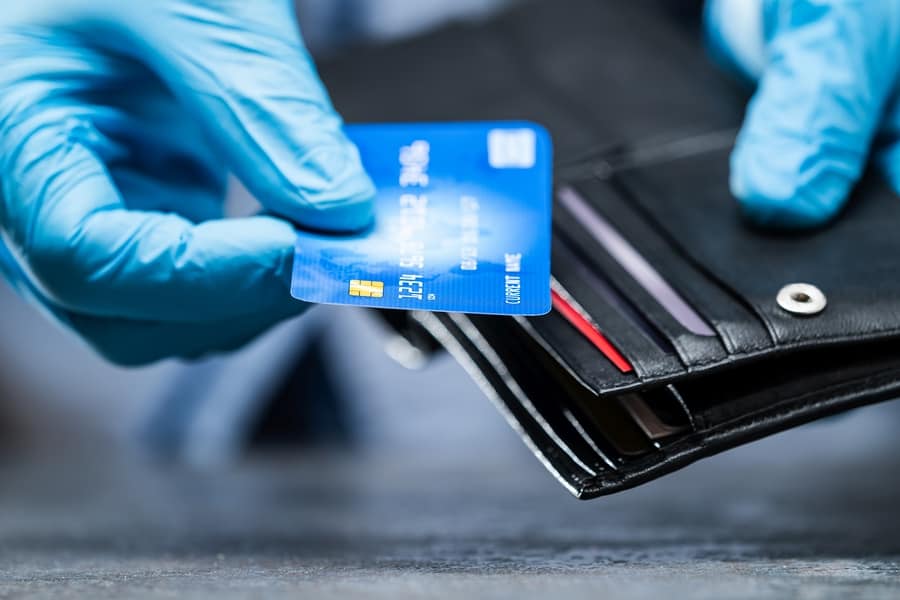 Contactless cards offer a simple and safe way to pay for purchases during the coronavirus pandemic. By ensuring that your wallet contains contactless-enabled credit cards, you’ll help keep both yourself and others at less risk throughout this turbulent time. Plus, you may find that paying with just a tap is both easier and faster than more traditional methods.

Divvy offers a free corporate card for virtually any business. Start earning rewards with your corporate spending today. Get your free card.

Divvy offers a free corporate card for virtually any business. Start earning rewards with your corporate spending today. Get your free card. 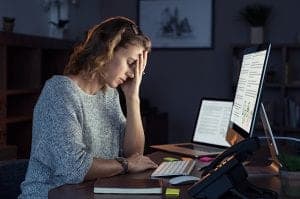 Can’t Make Your Credit Card Payments Due To The Coronavirus? These Credit Card Issuers Are Offering Assistance 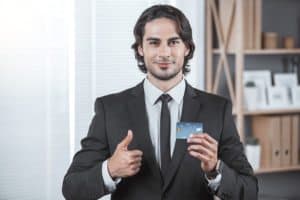 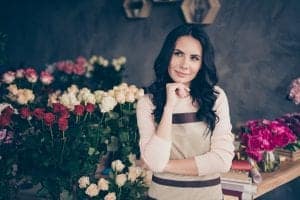 The Step-By-Step Guide To Getting A Business Credit Card 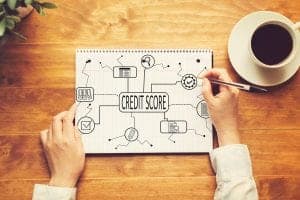 The Complete Guide To Credit Scores

The Best Line of Credit Options for 2022

See our expert's shortlist of line of credit providers to help keep your business flowing.

Divvy is one of our top picks for Corporate Charge Cards!