How To Identify The Pricing Model On Your Processing Statement 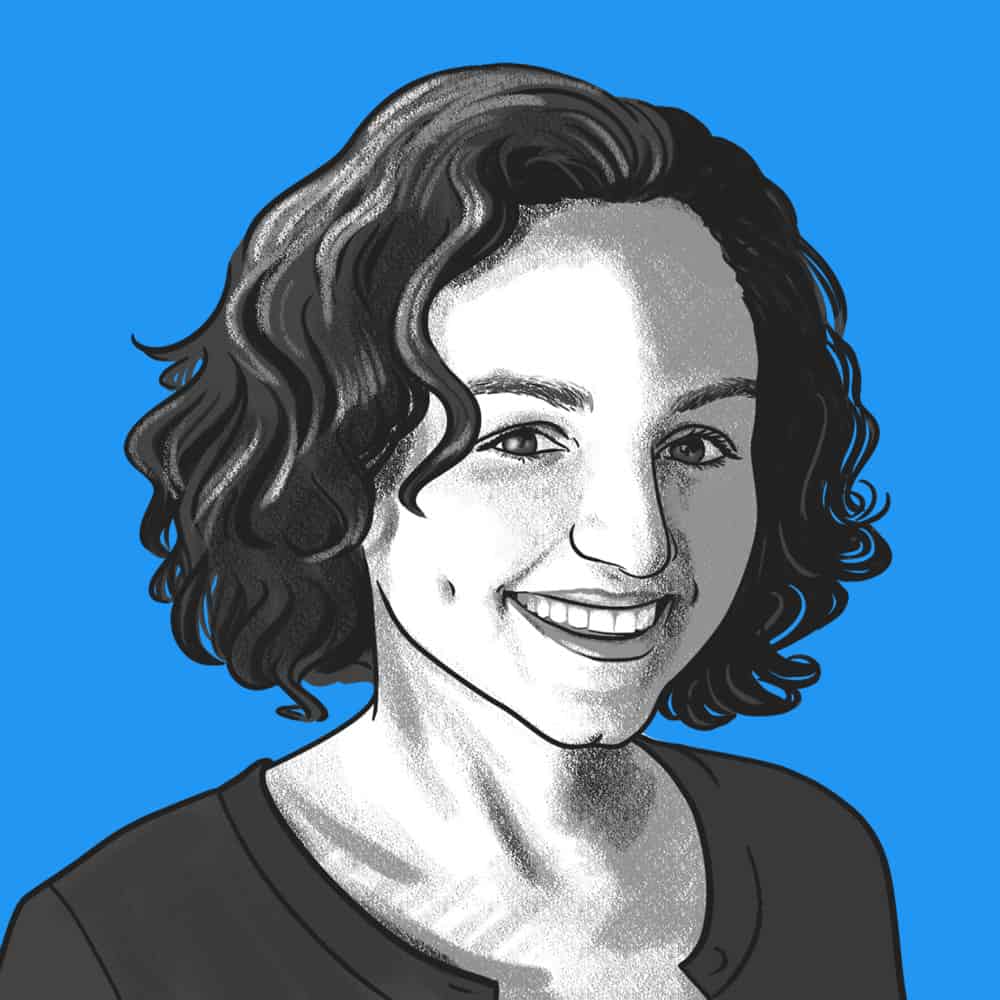 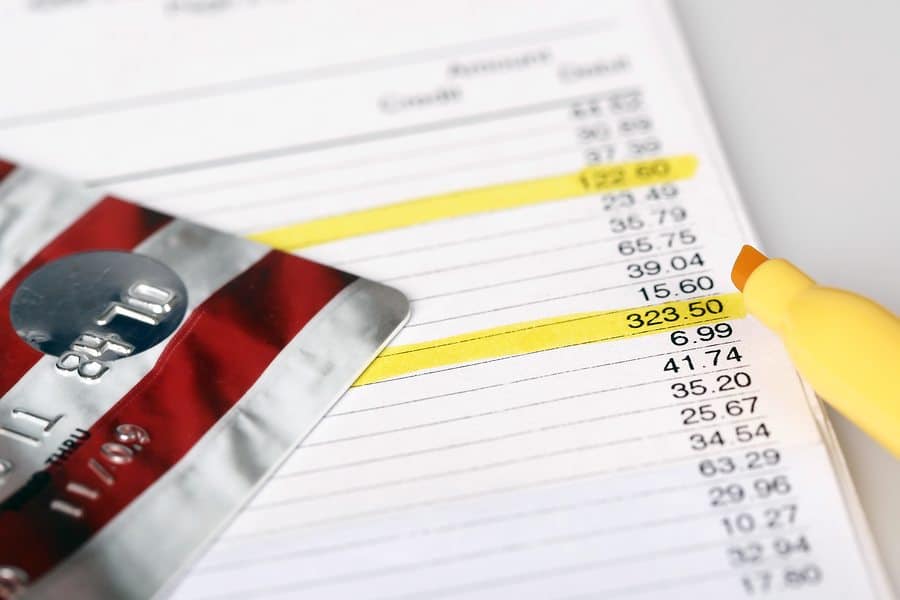 This was a popular PSA broadcasted to parents in the ’70s and ’80s, back when “stranger danger” was just about the scariest thing out there. Now, I have an equally important PSA for small business owners: “You have your processing statement. Do you know your pricing model?”

The ability to recognize merchant account pricing models (and, most importantly, which one you have) is a crucial step toward understanding your statement, as well as increasing your overall merchant-savvy. We’ve found that many merchants recognize the rates and fees they were quoted for processing, but without any broader context of which pricing model they have. This makes deciphering an already-confusing card processing statement all the more difficult, and makes discerning whether you’re paying too much nearly impossible.

Starting with a statement and working backward to an accurate understanding of how your quoted rates actually kick in is maybe not the ideal introduction to pricing models. Yet, this is most often the way things go, and I’m not surprised. No one goes to “merchant account school” for this stuff, and account providers vary widely in both their skill and willingness to thoroughly explain pricing.

The good news is that small business owners are no strangers to learning on the fly. So, grab a statement or two, and let’s get cracking!

A Quick Primer On Pricing

In broad strokes, the main pricing models are differentiated by the way your merchant account provider handles the wholesale cost of processing (what it must pay to other entities in the processing chain) versus its own markup. There are two separate types of wholesale costs — interchange fees and card association fees — but the differences between pricing models mostly center around how interchange fees are handled.

You’re probably already aware of the vast variety of credit and debit cards in circulation. Each type of card has its own pre-set interchange cost (a percentage of the sale and sometimes a per-transaction fee) that all merchant account providers must pay to the card-issuing bank when that particular card type is used. Over the years, the main merchant account pricing models have developed based on two possible ways of dealing with these wholesale interchange costs:

I’m putting “low” and “high” in quotation marks because we recognize they’re super-relative terms. Not to mention, the exact amount of your rate is only one piece of the puzzle. As a helpful simplification going forward, you can think of “low” as well under 1%, and high as over 1% (often at least 2%, or even much more). The important thing to remember is that a low rate may not include interchange already (look for those costs listed separately), while a high rate likely does.

The most common pricing models are interchange-plus, membership, flat-rate, and tiered. For more background on the models, check out these helpful articles:

If you’re still a bit foggy on the differences, that’s okay. For now, you can start with your statement and work toward a better understanding of merchant account pricing as a whole. We’ll get there!

Good Indicators, But Not Guarantees

While each pricing model leaves tell-tale signs on a statement, it’s important to note that no “standard” indicator is necessarily a guarantee. Think of the indicators we’ll discuss as good clues, or important signs. In truth, processors may include red herrings in their statements, or invent their own strange hybrid systems. Fortunately, most stick fairly closely to the main pricing models.

Now, we’re finally ready to look at the four main pricing models and their most common statement indicators. The more indicators for a certain model on your statement, the better the odds that’s the model you have. I’ll be using a few snippets of statements as examples, but note that any interchange rates listed are not necessarily the current values. Some of the statements are older. In any case, your statement will never match these completely. No two processors display this stuff in the same way. 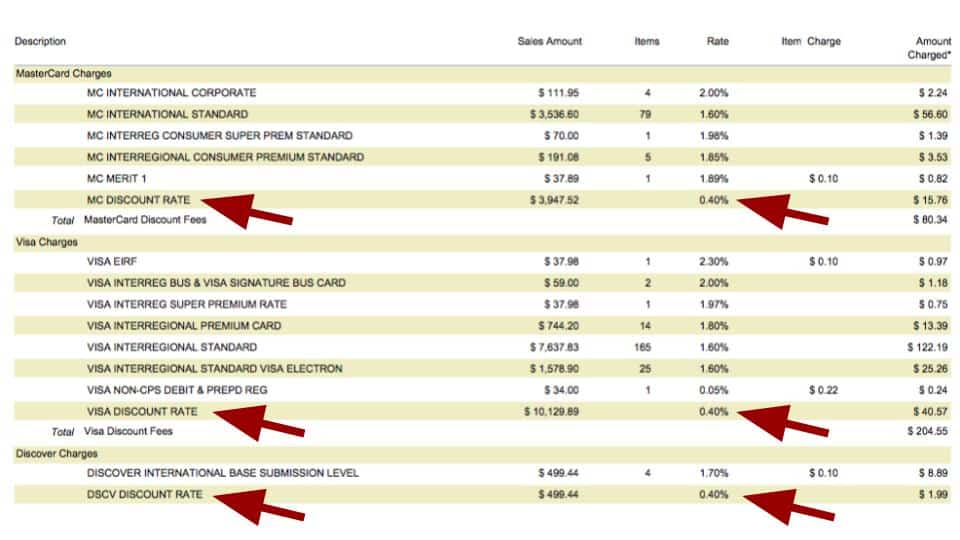 Example B: Consistent markup of 0.40% listed after each card type’s itemized list of interchange fees. All transactions/card types have the same 0.40% markup. 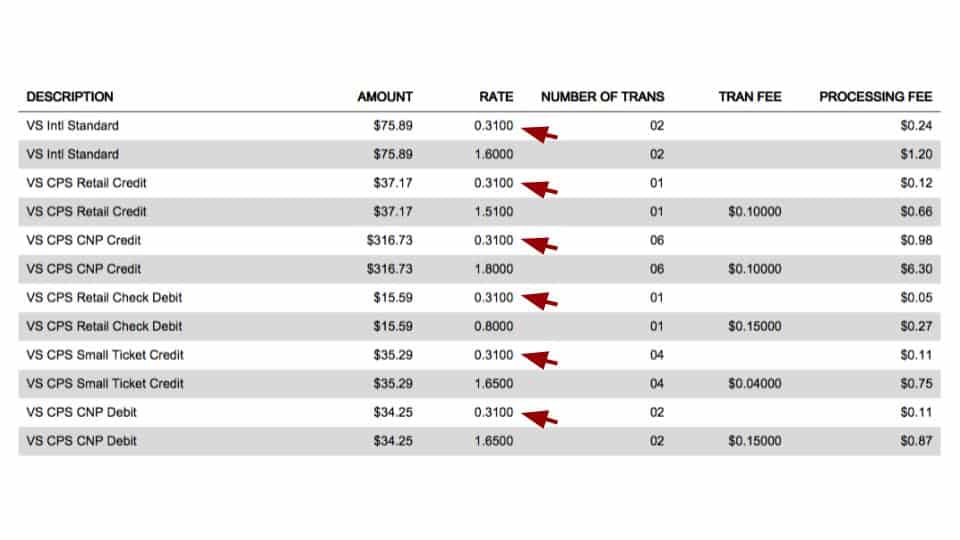 Example C: In the “Rate” column, a consistent 0.31% markup is shown directly above the itemized interchange rate for each type of card/transaction.

Membership pricing is sort of a riff on interchange-plus. The wholesale interchange rates are still charged separately from the account provider’s markup. The difference is that the markup comes in the form of one flat monthly subscription fee, and also a small, per-transaction markup. No percentage markup is charged. Here are the main statement indicators of subscription pricing: 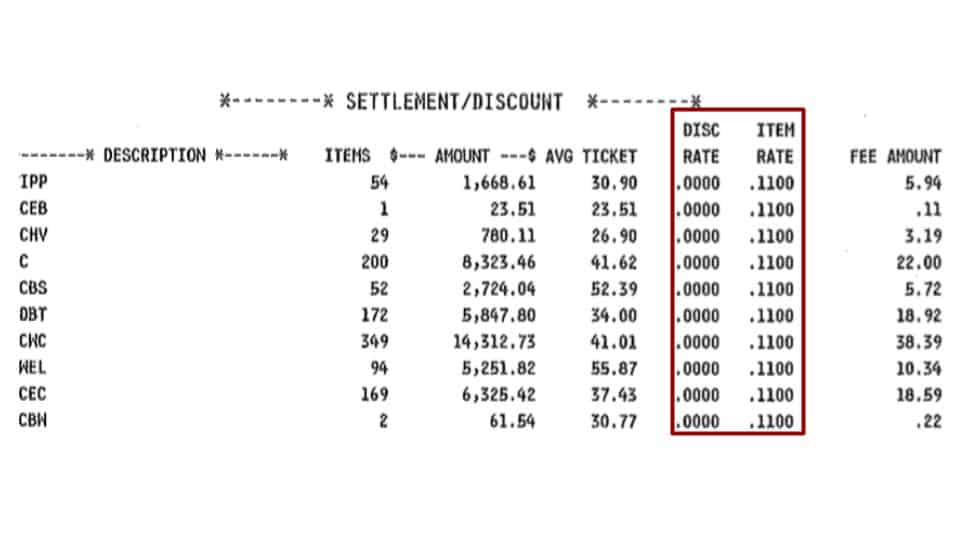 Example E: Consistent $0.11 “Item Rate” charged on all card/transaction types. No “Disc Rate” % markup. This account had a membership fee of $120/month (not pictured).  Interchange rates were itemized separately (not pictured).

This is the model most commonly offered by third-party payment facilitators (a.k.a. PSPs, merchant aggregators) like PayPal, Stripe, and Square. Occasionally, traditional merchant account providers use it as well. In this all-inclusive model, wholesale charges and the processor’s markup are all blended together into your one, flat processing rate. If a per-transaction fee is part of your rate, this also goes toward covering your provider’s wholesale costs plus any profit margin. Your flat rate covers all types of transactions, from inexpensive signature debit transactions, all the way to expensive business rewards cards. You’ll typically observe:

This is another case where you can’t see the itemized interchange rates separate from your processor’s markup on your statement. Instead, your transactions are first grouped into tiers according to the processor’s pre-set criteria. Each group (tier) is then charged a flat rate that already includes the interchange costs for those transactions. If you’ve got a tiered plan but have only been quoted one rate, it’s typically the rate for transactions that fall under the lowest, “qualified” tier. In reality, some transactions may be downgraded to higher priced tiers (mid-qualified and non-qualified). You have no real way of predicting these downgrades ahead of time. Here’s what you’d see:

Example H: In the same statement as above, we find a surcharge section. Twenty-two transactions were downgraded to non-qualified (amounting to an extra 2%) and 30 to mid-qualified (an extra 1.47%). Multiple rates for multiple tiers at play!

Did you recognize your own pricing model among these main four types? If you made it this far with your statement, I hope you’ve at least developed a strong hunch. While each model has its merits for different situations, you can probably tell we prefer the inherent transparency and comparability of models that separate out the interchange costs from the account provider’s markup. By the same token, we have a hard time getting behind the unpredictable downgrading and surcharging of tiered pricing. I’d encourage you to check out our top merchant account providers if you’re looking for a fresh start. All of them offer transparent interchange-plus or subscription pricing plans.

Parents of the 70s and 80s feared “stranger danger” above all else, but my biggest fear for merchants is that they pay too much or even get scammed because they don’t have a solid understanding of their processing statements. Knowing and recognizing your pricing model is one of your best protections as a merchant. If you’re still unsure about yours, drop us a line and we’ll see if we can help!

Get a free credit card reader when you sign up!

Square Payments is a secure and reliable credit card processing platform. It's advanced solutions and broad feature-set makes it a great fit for most businesses.