🏦 Get funded today with one of our top lenders for 2021

Launching A Kickstarter Campaign? Here Are 10 Things You Need To Know 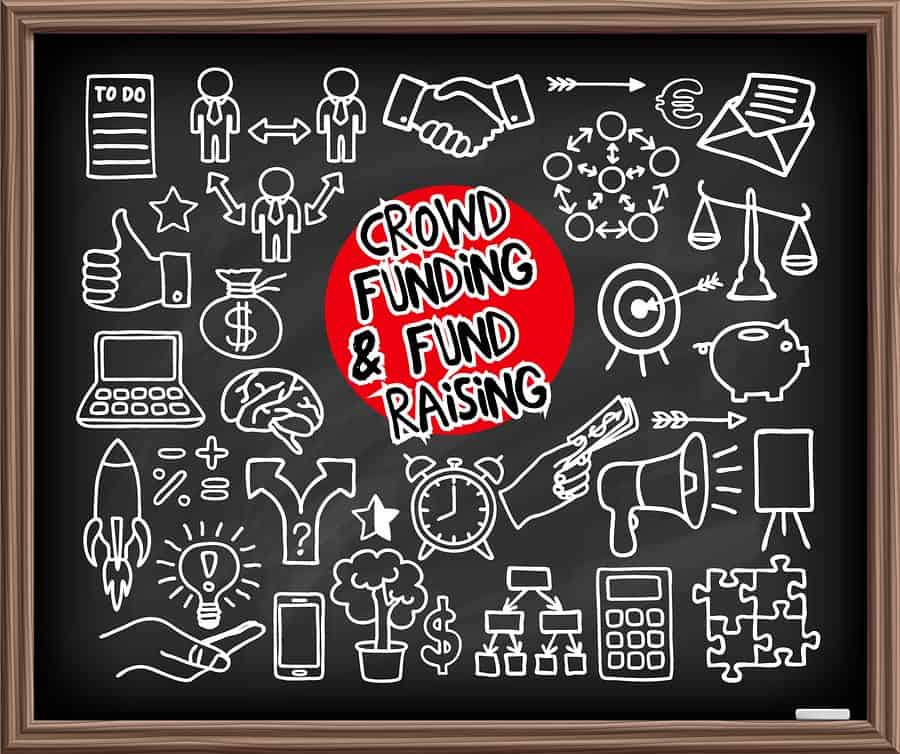 Kickstarter has become the go-to means of financing a project for the modern-day media-savvy producer of technological, artistic, and cultural goods. The prospect of being able to tap into a community of moneyed consumers eager to get in on the ground floor of The Next Big Thing is a tempting one indeed. Especially when you consider that the alternative may be to pry a loan from the ice-cold hands of a bank — a loan which, even if by some miracle you are able to obtain, you’ll still have to pay back, unless bankruptcy is part of your business plan.

Sounds a bit daunting, doesn’t it? The thing is, it doesn’t have to be. Be methodical in your approach to conducting your Kickstarter campaign and heed these ten tips for crowdfunding success.

Check Out The Ghosts Of Campaigns Past

Kickstarter does every crowdfunding campaigner a huge favor, and they don’t even make much mention of it! When a Kickstarter campaign ends, whether it succeeds or fails, the campaign is left up on the website — they’ll never take it down. Now, for the campaigner who launches some half-baked project, fails, and subsequently tries to forget the whole thing ever happened, this may not seem like much of a favor. But for you, the creator in waiting, it most certainly is. Those past campaigns are a treasure trove of raw data.

Go back and look through old campaigns in your area of specialty. Pay close attention to the campaigns that have succeeded, as well as the campaigns that have crashed and burned. See if you detect any patterns that correlate with success. With over 360K projects launched thus far, there’s an incredible amount of data sitting there on Kickstarter’s servers just waiting to be exploited.

You don’t get to peruse every business loan application ever submitted to a bank to see what works and what doesn’t. But with Kickstarter, everything is preserved and available for public viewing. Take advantage of this and do some research.

Be The Public Face Of Your Campaign

Kickstarter has long been seen as a place for passion projects. Projects that inspire a level of devotion and wonder above and beyond the average business venture. It’s why Kickstarter refers to those who launch campaigns on their site as “creators” and not “campaigners.” In keeping with this spirit, if you want to win the hearts (and thus the wallets) of potential backers, you need to personalize your campaign.

Don’t be shy about including information about yourself and your motivation in doing what you do as part of your campaign. Get people invested in not just the success of your project, but in your success. If people see that you are passionate about what it is you’re doing, they are more likely to share in that enthusiasm. Don’t be afraid to put yourself out there. Be concise, though. Too much personal background info and people might lose interest.

Kickstarter estimates that including a video in your project presentation increases your odds of having a successful campaign from 30% to 50%. That probably won’t come as a surprise to you. The better your presentation is, the more likely it is that you’ll succeed in your campaign.

That’s why it may be worth it to invest some money into the production of your video. A well-produced video will convince backers that you’re serious about your project and have the resources to see it through. You’re probably not eager to devote your precious funds towards something other than the subject of your campaign, but consider that there are countless great ideas looking for funding from Kickstarter backers. It would be nice if the quality of your ideas could carry the day, but the reality is that you need to find additional ways to differentiate yourself and your campaign if you want to break through the noise. Likewise, make sure to be deliberate about your logo and other design choices.

Line Up Backers Before You Launch Your Campaign

Backers can be averse to being the first to support a project. Seeing “$0 pledged” on a project is enough to send people away, even if you’re just getting started. This is why it helps to secure backing before your campaign even launches.

Try to get your family and friends involved in backing your project before it goes live, then have them contribute once your project has launched. Consider building an email list of interested folks from your personal and professional networks as well. Then, once your project has gone live, notify them immediately. The importance of getting early backing extends beyond the value of the contributions themselves. According to Kickstarter, 78% of the projects that raise over 20% of their funding goal are ultimately successful. Do whatever you have to do in order to secure that crucial early funding. It may be the key to attracting subsequent funding from those you don’t know. Success breeds success.

Take Advantage Of The Data In The Project Dashboard

You could rely on intuition in determining how to market your campaign. A better idea would be to use Kickstarter’s Project Dashboard, which gives you access to a bevy of useful data. The Dashboard lets you see exactly where your backers are referred from. I’m not talking about traffic in general, but actual backers. You’ll see the domain source your backers are coming from, the number of pledges from that source, the amount pledged, and the percentage of your total amount raised from each domain. This information is highly valuable in helping you determine where to put your marketing efforts. 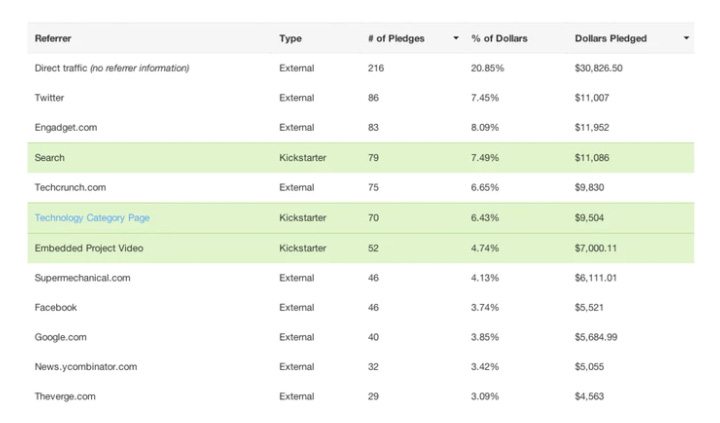 Along with this, the Dashboard also gives you data regarding the popularity of your various reward tiers. Data is more valuable than intuition. Take advantage of the data Kickstarter freely gives you.

Communicate With Your Backers

By backing your project, people are placing their trust in you to deliver on your promises. They do this knowing there’s no guarantee they’ll receive anything in return. Show your backers the respect they deserve by keeping in touch with them. Keep them informed about your progress, and be as open as possible.

Keep track of social media chatter relating to your campaign. See what concerns people have. Respond to people. Give them a reason to take a leap of faith and place their trust in you.

Invest in Marketing Your Campaign

I realize you probably didn’t get into this realm with the intent to become a salesman or a PR flack. It would be great if your campaign could sell itself. In the early days of Kickstarter, you might well have gotten away with not spending money on advertising and PR. But as some observers have noted — not without a touch of bitterness — the backlinks directed towards successful Kickstarter campaigns tend to reveal a lot of traffic coming from Facebook or Google AdWords.

Don’t be squeamish about running an ad campaign. For better or worse, it’s the way the game is played these days. If you have the resources, you may want to hire a PR agency and/or an advertising agency to handle the promotional stuff so you can focus on your passion.

Entrepreneurs tend to have a healthy regard for their ability to accomplish big goals. If they didn’t, they would have found another line of work. However, there are benefits to keeping your funding goal modest.

Determine how much money you’ll need to accomplish your goals and cover expenses. Take into account Kickstarter’s 5% platform fee and the fees charged by the payment processor. Just don’t ask for more than is absolutely necessary. You’ll clearly have better luck meeting a modest fundraising goal than a more ambitious one. And as I said earlier, success breeds success, so a successful campaign can set the stage for more winning projects in the future. What’s more, with a modest funding goal, you’re more likely to have a campaign that blows well past what you set out to raise, which can impress interested parties — and perhaps the media — in and of itself.

Don’t Offer Too Many Reward Levels

Studies have shown that when you offer people too many choices, they’re likely to feel overwhelmed and will often decide that making the choice isn’t worth the hassle.

Decide on rewards that are clearly presented and which appeal to your target audience. Offer entry-level rewards for even minuscule pledges so as to give the broadest possible array of potential backers the ability to feel like they’re a part of your project. Get them invested in your success. Just don’t offer an overabundance of rewards, and especially not a plethora of similar rewards or variations on the same reward. Keep it simple, stupid.

Don’t Do It All Yourself

I know, I know. You’re a self-starter. You like to Do It Yourself. However, crowdfunding is hard. When Kickstarter launched in 2009, running every aspect of your campaign yourself may have been a more feasible proposition. Nowadays, you’re competing with companies backed by angel investors in many cases. Their agencies have agencies, for crying out loud.

Try to manage every aspect of a modern crowdfunding campaign while remaining committed to your actual project — the reason you started your campaign in the first place — and you’re liable to spread yourself too thin.

Whether you have an agency to handle the marketing, business partners to help handle your project, or your friend’s kid to handle the social media outreach, Kickstarter campaigns are best approached as group projects. It takes a village! (Remember, you’re competing against villages)

For thousands of entrepreneurs and startups with big ideas, Kickstarter has been a godsend. Creative projects and products that would otherwise never have seen the light of day have found rabid fans around the world. Crowdfunding is a good thing. But be warned: the playing field is not level. Your bright ideas will be competing for The Crowd’s money with big crowdfunding agencies. Entire squads of suits who may lack your creative spark but who know their business strategies.

Don’t get left in the dust. Do your due diligence to make sure your hard work and creative spirit hit paydirt. Kickstarter is a maturing platform, and it’s not just for the little guy anymore. Be smart in your approach — and maybe start with some cash as well — and your project could be the next RompHim. I only pray you experience that kind of transcendent creative satisfaction at some point during your time on Earth.

We Recommend OnDeck for Loans 🏆