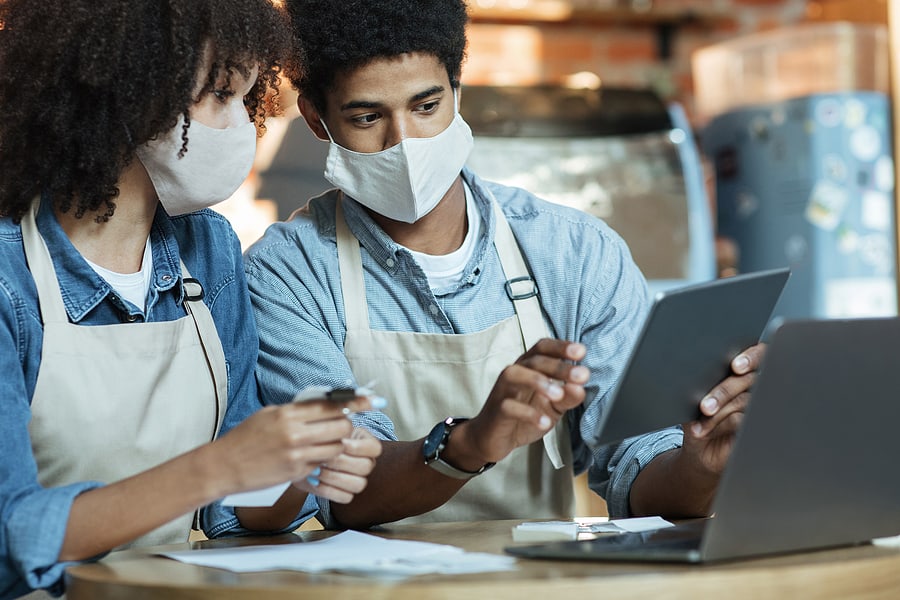 This week, reports showed hope for economic recovery in the US while new information shined a light on where workers went and how their work habits changed in 2020.

Read on through for this week’s top five must-know stories for small business owners:

Seeds Of Hope For The Economy

According to the latest national employment report by the Automatic Data Processing (ADP)’s Research Institute, small businesses added 51,000 jobs in January. This provides a stark contrast to December when the ADP estimated that small businesses lost 13,000 jobs.

These findings of economic hope echo other reports as the US continues to slog through the pandemic. According to an estimate by the Congressional Budget Office, the US economy will return to pre-pandemic levels in mid-2021 — earlier than previous expectations. The CBO also expects to end 2021 with a 5.3% employment rate, which is 1.5 points lower than what the country ended 2020 with.

Why it matters to you: While we certainly aren’t out of the woods yet, these latest reports give hope that COVID will soon be in the review mirror. Especially as COVID vaccinations rise across the country, the normal work-life flow will hopefully return later this year.

As 2020 encouraged work-from-home setups, workers ventured out from high-cost-of-living areas — most notably California and New York. Per new research, workers often left big cities for suburbs and coastal states for landlocked ones. In particular, Idaho topped the list of states with the most inbound moves.

Meanwhile, a different report by NordVPN found that workers across the world are working longer hours. For the US, workers now average 10.5 hours of work a day instead of the more traditional eight.

Why it matters to you: For those businesses that are currently allowing work-from-home, it’s crucial to encourage workers to maintain a proper work-life balance. Longer hours can often increase stress and hurt productivity — both of which need to be kept to healthy levels during an already too long pandemic. On top of that, giving now-remote workers the freedom to move to more affordable areas could also be seen as a way to boost worker morale.

Further reading: Working From Home With Kids? Survive The Quarantine With These Proven Tips From Our Remote Team, Merchant Maverick

During her confirmation hearing this past week, President Biden’s nominee for the head of the SBA Isabel Guzman highlighted her goals to help minority-run small businesses.

“There are many communities that face barriers to capital or have experienced historic racism or barriers that have prevented them from building the wealth that’s needed for accessing capital,” Guzman said. “It’s really critical that we look at all of our programs from that lens of equity and make sure we’re reaching our underserved populations.”

Why it matters to you: Struggling minority-run businesses are not alone — too many have already gone under during the pandemic. Hopefully, Guzman’s focus on helping those underserved small businesses will pay off and create a more inclusive and diverse economy.

PPP Not Enough For Small Businesses

The Paycheck Protection Program has been a helpful tool for some small businesses. However, recent research shows that the program hasn’t done enough to get all small businesses through COVID.

For instance, the Treasury has concluded the PPP has saved 19 million jobs. However, private economists estimate the program has only saved between 1.4 million to 3.2 million jobs — a much more sobering range.

In addition, the already-mentioned Federal Reserve report found that more than a third of small businesses won’t survive without more government assistance. And over half of those businesses surveyed said they would apply for another round of government funding if offered.

Why it matters to you: The PPP, which has now doled out over $70 billion in loans during its second run, can only go so far to help struggling firms. Small businesses will need to continue to innovate and push for more government aid as we hit the potential home stretch against the pandemic.

Further reading: Some economists say the Paycheck Protection Program has not saved many jobs, The New York Times

Robots In The Workplace Are Causing Headaches

As social distancing has risen in the past year, some workplaces have turned to robots. In fact, 2.77 million robots are currently operating in industrial settings, an increase of 330,000 since 2019.

However, the rise of workplace robots hasn’t been all sunny, says a recent article by Wired. Because these new robots are often produced by different companies, they sometimes have difficulty communicating with each other. One exchange is particularly humorous:

So many robots work at Changi General Hospital in Singapore that until recently it wasn’t uncommon to find two delivery bots sitting in a hallway or outside an elevator in a standoff.

Such impasses used to happen “several times a day,” says Selina Seah, who directs the hospital’s Center for Healthcare Assistive and Robotics Technologies. Unsure how to move around another object, or human passersby, the robots would simply freeze, each waiting for the other to move first. “The humans would have to actually go down and pull them apart,” she says.

Why it matters to you: While most small businesses probably aren’t using robots on a daily basis just yet, such mechanical friends may be more and more commonplace in the future. It’s important that these early woes can be sorted out before everyone has robotic coworkers.

Small businesses often make up the cornerstone of communities across America, so it’s great to see some data that provides hope for the future.