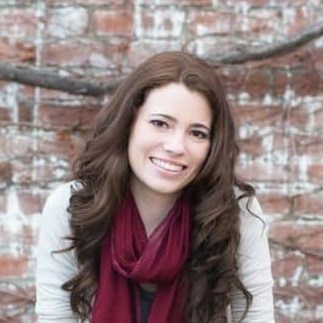 Looking for a fresh pick? Try FreshBooks For Free

Ballpark was founded by Andrew Wilkinson (the founder of MetaLab) in 2006 — the same people that brought the world the home-run-of-a-software Slack. Now the question is, does Ballpark hit it out of the park as well or does this software strike out?

Ballpark was bought out by SimpleFocus in 2015, and since then, the company has been rolling out improvements like adding a project management feature. The biggest change came in 2018 when Ballpark was completely redesigned. The software is now easier to use and has a much more modern UI. But is that enough to make Ballpark the right choice for your business?

While we love the new design, Ballpark still has some serious drawbacks that keep the software from holding up to the competition. There are no mobile apps, no live bank feeds, no reports, limited integrations, incredibly limited support options, and the new pricing structure can get quite expensive if you need multiple users.

Ballpark isn’t out of the game entirely, but there are a lot of other programs that play the game better. Check out our top-rated invoicing picks to find a good Ballpark alternative. If you are still interested in Ballpark, continue reading.

Along with a brand new redesign, Ballpark has a brand new pricing structure that is more simple and more affordable than the previous plans — that is if you’re a freelancer or micro business owner. For businesses with a large number of users, Ballpark can be incredibly expensive. Ballpark’s pricing is a flat fee of $19/month plus $9/month for each additional user. Here’s a breakdown of what the cost could look like depending on the size of business you run. 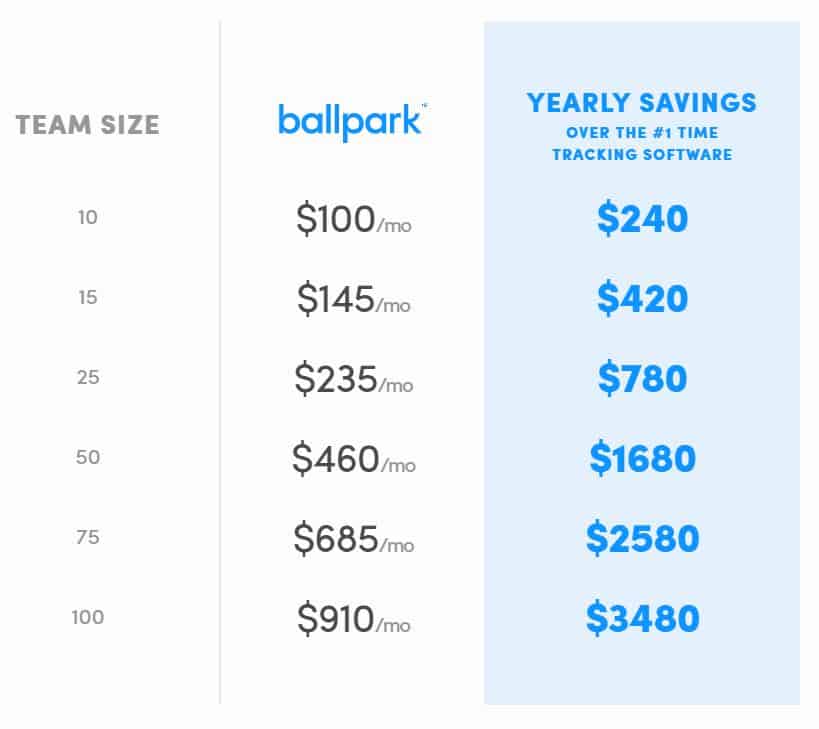 Payments are made monthly, and you can cancel your subscription at any time. There’s a free 14-day trial, no credit card information required. Here’s what you get with a Ballpark subscription:

Note: Once you hit 100 users, your company qualifies for a pricing discount. Contact Ballpark directly for details.

There are a few extra costs and services that you may want to add.

There are no strings attached, and there’s no commitment required to get started. We want the chance to earn your business.

Cloud-based. No downloads or installation required.

As cloud-based software, Ballpark works with nearly any device so long as you have an internet connection. No mobile apps are available at this time, although you can access Ballpark on your mobile web browser.

Ballpark is designed for freelancers and growing agencies that need a simple invoicing solution. The invoicing features Ballpark offers are ideal for product-based or service-based businesses and the new pricing structure makes Ballpark a more realistic option for small business owners — for businesses with a lot of users Ballpark is going to get really expensive really fast. For freelancers wanting more advanced freelance-specific features like proposals and contracts or self-employment tax support, we recommend taking a look at AND CO and QuickBooks Self-Employed instead.

The software is not ideal for businesses in need of live bank feeds, accounts payable, or reports as Ballpark does not offer these features. We recommend taking look at Zoho Invoice instead if you need these capabilities.

You can have numerous users with Ballpark and there are user permissions available. You can set three user roles: admin, basic, and timer.

Ballpark has always been easy to use, but with the recent redesign, it’s even more so. The UI is much more modern and is generally well-organized, although there are still occasional navigational difficulties. If you do happen to get stuck, there aren’t many resources to help you learn the software, but you can fill in a support form from directly within the program.

Ballpark offers a good selection of invoice features including most everything you’d expect to from typical invoicing software — minus live bank feeds and reports. Here’s what to expect from Ballpark: 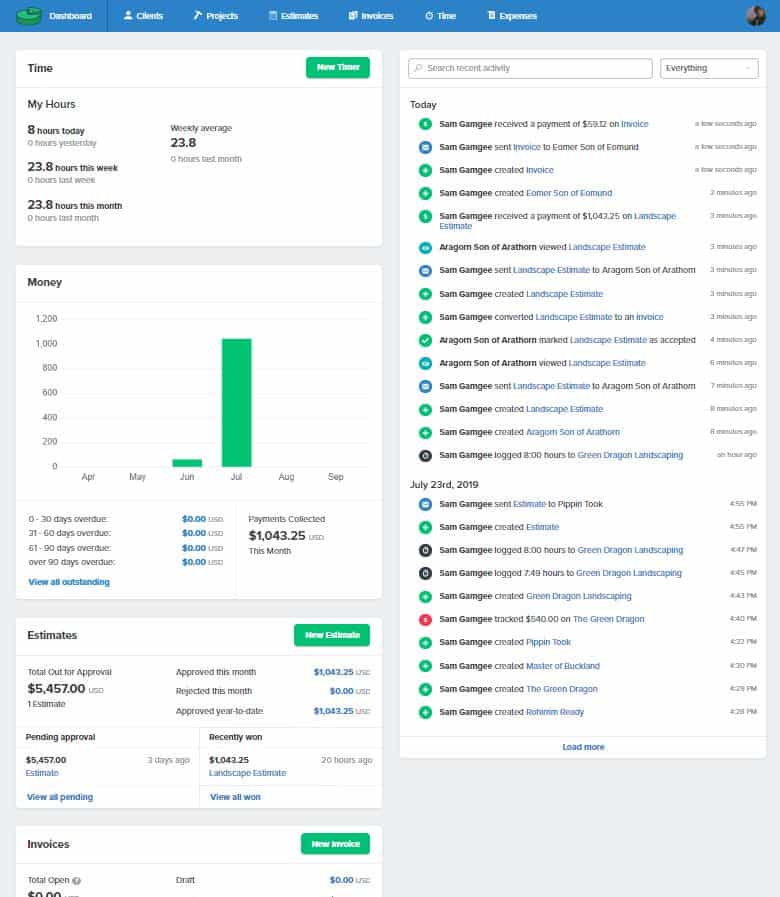 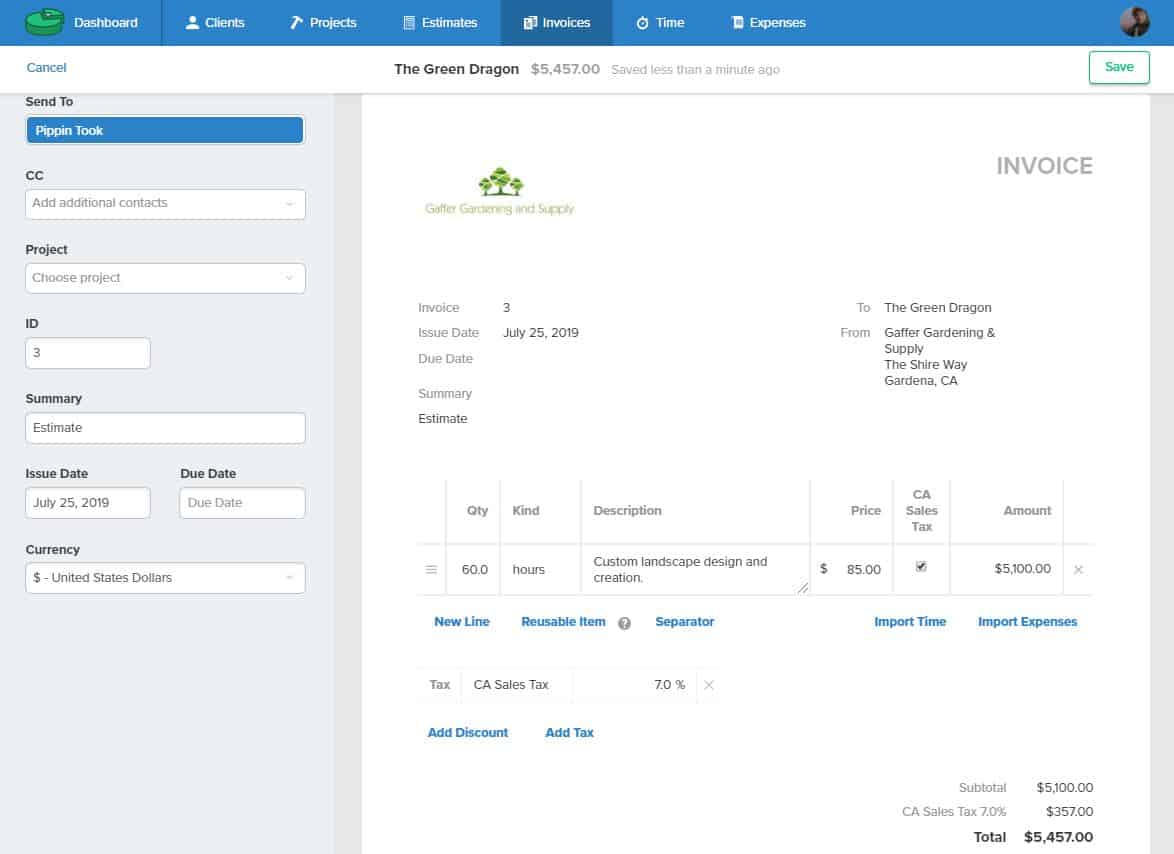 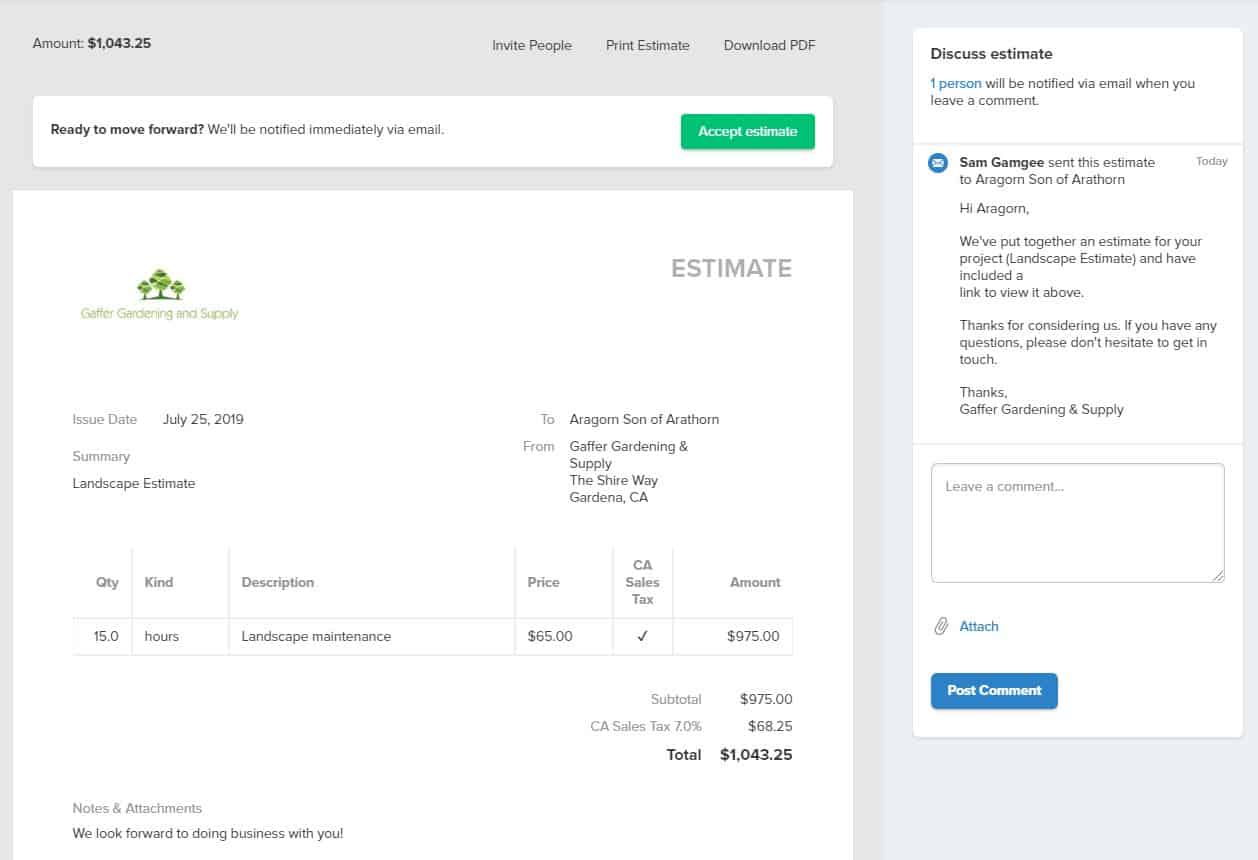 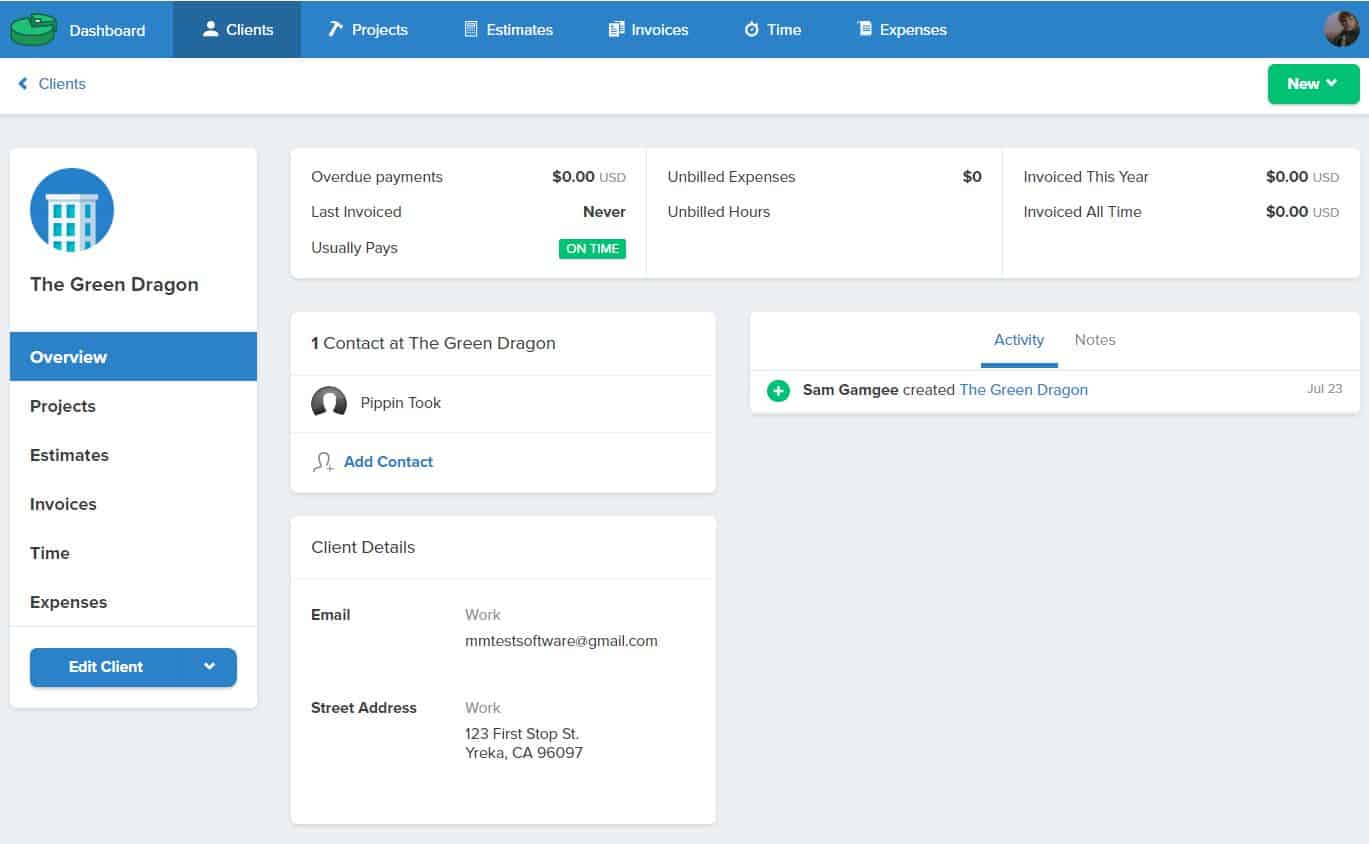 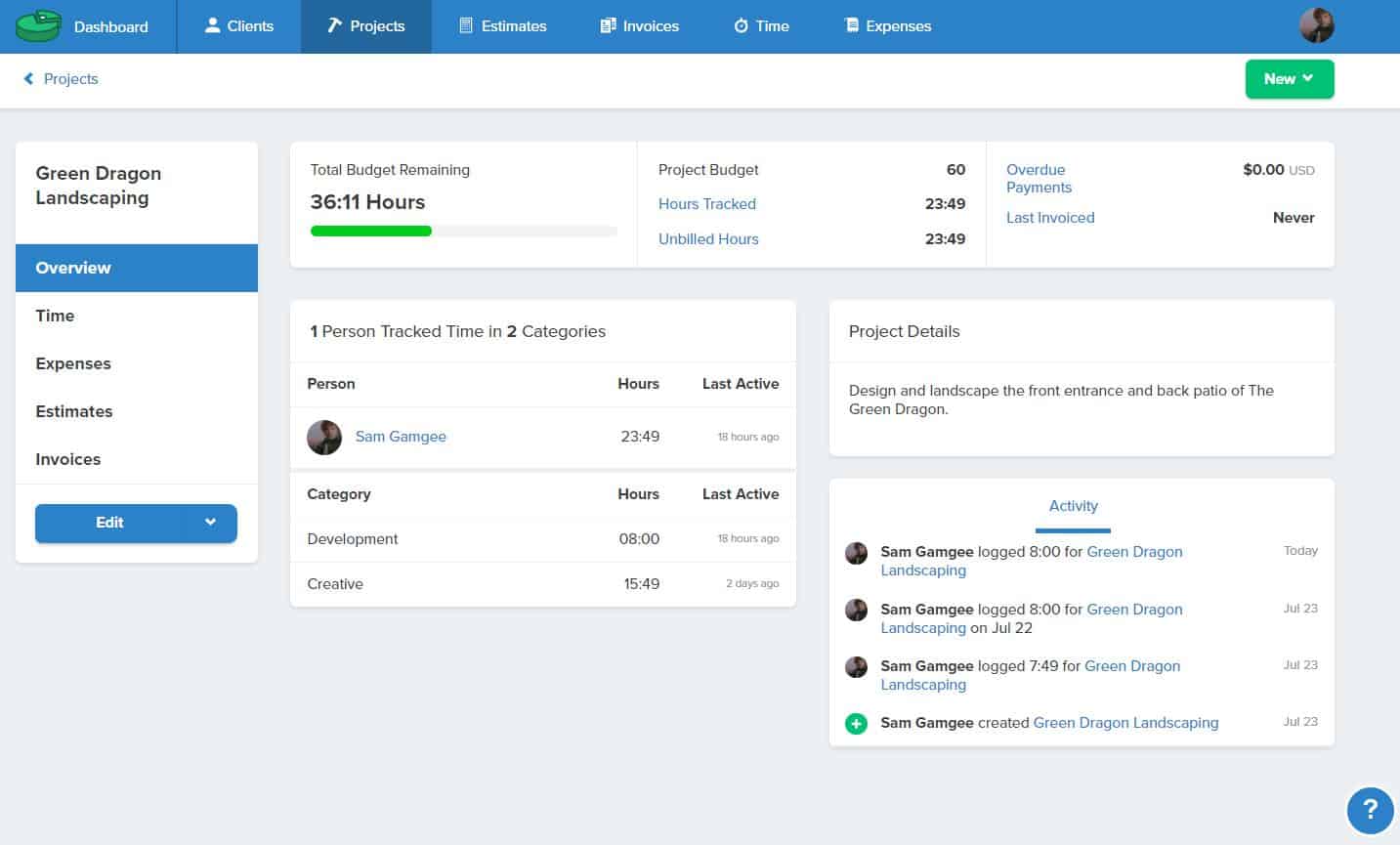 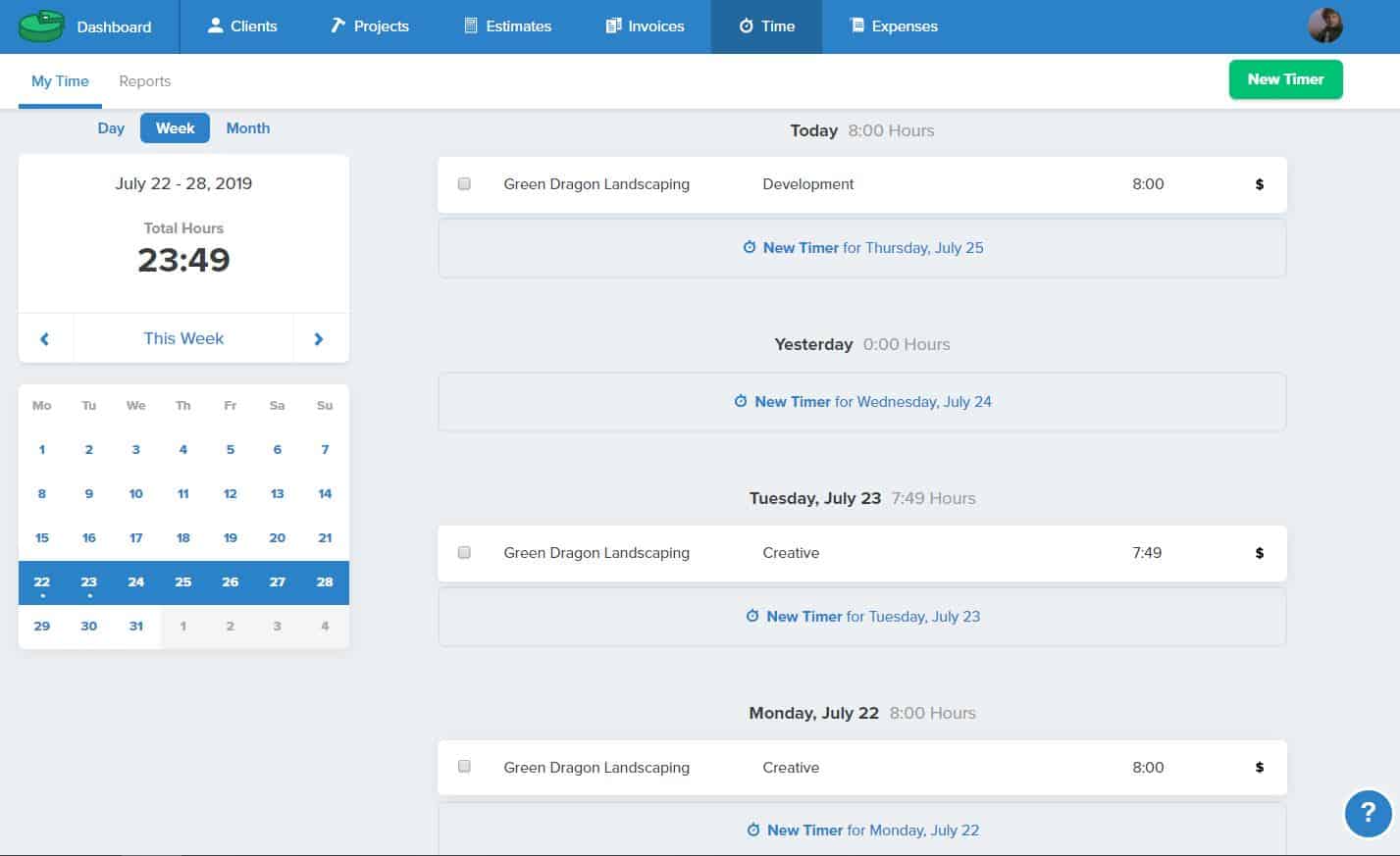 Compared to most software, Ballpark has an incredibly small number of support options, and since our last review, the software has gotten rid of their help center and chat. Nearly every software offers at least a basic help center. Basically, your only option is to fill out a support form. Ballpark’s saving grace is that the responses to their support form are fairly quick. Most questions I sent were responded to within a few hours, and some were responded to within minutes.

Customer service is available Monday through Friday from 9 AM to 5 PM. The small number of support options include:

Ballpark hardly has any customer reviews online and its internet presence is nearly nonexistent (and drowned out by dozens of baseball ballpark sites). For this reason, I created a list of my own issues with the software that could be potential problems for customers.

Since there are hardly any customer reviews, we created our own lists of software highlights as well. Here are Ballpark’s strong points:

Ballpark only offers three integrations — Stripe, PayPal, and Highrise. If your company needs an invoicing program with a larger selection of integrations, we recommend taking a look at Harvest or Square Invoices instead.

Ballpark is not very forthright about security measures on their website, which is worrisome, but they are willing to share more details if you contact them directly. According to Ballpark’s customer service team, the company uses SSL encryption. Data is backed up regularly, and the company uses Heroku to host their servers. Ballpark does not store any customer credit card information; all credit card information is controlled by Stripe. Ballpark is also GDPR compliant.

In the invoicing field, Ballpark has some good things going for it but strikes out on several fronts. Ballpark offers almost all of the features one would expect to find in a top invoicing software and throws in some unique touches like client communication. However, the features themselves don’t have the depth to truly compete with those of vendors like Zoho Invoice and FreshBooks, and the lack of live bank feeds and reports could be an issue for some business owners. The limited integrations, lack of mobile apps, and the incredibly small number of support resources also don’t paint the software in a good light.

It’s worth noting that the support the software does have is timely and helpful. Overall, it’s not that Ballpark is bad, it’s just that other invoicing options are better, and they don’t cost an arm and a leg if you have multiple users.

That being said, since acquiring the software, Simple Focus has made several positive changes, and the latest redesign was a huge step in the right direction. So if this company keeps this up, we might see Ballpark move up to the major leagues yet.

If you’re interested in Ballpark, take advantage of the free 14-day trial, or check out our comprehensive invoicing reviews to find the perfect invoicing software for your business.

Expert Analyst & Reviewer
Chelsea Krause is a writer who has specialized in accounting for over five years and is a QuickBooks Certified User. She has a BA in English & Creative Writing from George Fox University and studied at the University of Oxford as well. She has been quoted in Forbes and her work appears in Startup Nation, Small Business Bonfire, and Women on Business.

To learn more about how we score our reviews, see our Invoicing Software Rating Criteria.

I was a Ballpark customer since 2011. When I started using the service, it was great. But they have done basically nothing as far as feature updates the entire time I was a subscriber. They focused on small items like timers, when their exporting features are absolutely dismal. The complete lack of expense tracking, a feature pretty much every other invoice software has at this point is also a glaring issue. I went to cancel my account today and ran into 2 more issues. To export all data from the time I joined was a complete pain. Luckily I spent a few days doing it, because as soon as hitting ‘cancel’, your account is deleted. Any other subscription service I use for pretty much anything let’s you run out the remaining time on the month you paid for.There was a time I would have recommended Ballpark, but there is no way I could now. They are basically stuck in 2011 as far as features, while every other invoice software out there buries them feature wise. And, for less money per month in most cases.

Easy To Use Accounting And Invoicing Software

Need A Payroll Management System? ADP Is A Top Choice!

Manage payrolls for all employees in one place.
Get 3 months free when you sign up.