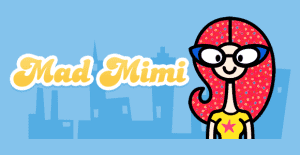 At times it seems like there are two competing philosophies when it comes to ESP (email service provider) naming conventions. Some vendors take a dead serious approach–these probably have the word “campaign” somewhere in their names. And then there the ones who choose a moniker that is personified by a zany character who you can imagine delivering your emails in some madcap fashion. I’m not passing a judgment on either convention, but Mad Mimi–ostensibly a crazy woman who launches emails at your contacts using early 20th century rockets–obviously belongs to the latter group.

Founded in 2008 by Gary Levitt and developed by Tobie Langel, Dave Hoover, and Jeff Patton, Mad Mimi is touted as “the world’s most sensible and enjoyable email marketing tool.” Gary was originally looking for an email tool to market his small music company, but his little project quickly morphed into a full-bodied ESP. In 2014, Mad Mimi was purchased by Internet domain registrar, GoDaddy.

Mad Mimi seeks to bring playfulness and an easy learning curve to the ESP market. That it succeeds is a testament to its excellent production values and (mostly) brilliant design.

Mad Mimi keeps pricing plans pretty simple, with several plans featuring unlimited emails and storage. Instead, your dollars pay for higher subscriber caps and increased send speeds. There are four pricing plans, and they shake out as follows:

It is worth mentioning that Mad Mimi also offers a free plan, though you are limited to just 100 contacts if you want to go that route. Monthly subscriptions are automatically renewed, and if you want to cancel your subscription, you do so by contacting support@madmimi.com. 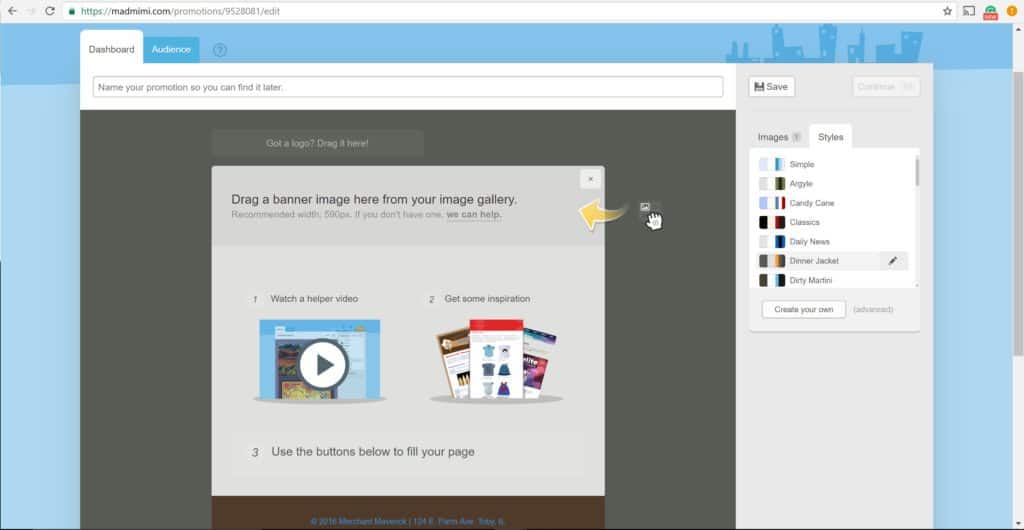 Mad Mimi is designed (presumably) to warmly invite you into her web of email madness. From the cartoonish pastel colors to the simplified layout, Mad Mimi seeks to remove as much intimidation from the user process as possible and, perhaps, add a playful sense of fun to the idea of email marketing. This is achieved in clever little ways, like visual effects that trigger when you click on buttons and graphical assets that “pop” on the screen. It’s mostly window dressing, but it greatly improves the user experience.

Colorful, contextual tutorials will guide you through your first email.The whole program is light and breezy and, with only two tabs, it’s nearly impossible to get lost. The drawback, of course, is that all of this might frustrate or even annoy marketers who don’t appreciate the levity of the program.

If Mad Mimi looks absurdly simple, it’s not quite as bare bones as it seems. By clicking on Add-Things, you can add additional functionality to your account by turning more advanced features on and off. It’s a clever design, but be aware that some features lurk behind a paywall.

Like most things Mimi, managing your contacts is easy and highly visual. Simple, animated icons let you know whether you’re trashing something, renaming it or moving it.

Your contacts are accessible through your Audience tab. On a left sidebar, you’ll find the lists you’ve made so far and the tools for making new ones.

You can add new contacts one at a time or by importing them from a .csv, .txt, vCard or Excel file. You can also just copy and paste them in. Mad Mimi doesn’t prompt you to add custom fields upon your initial import, but you can do so after the fact.

Contacts that are unconfirmed, bounced, or unsubscribed are added to your “suppressed” list, where they aren’t counted against your maximum number of subscribers.

Mad Mimi’s email editor is pretty simple and straightforward. Unlike many of the ESPs I have tested, however, they don’t offer traditional templates. Instead, you choose what kind of message you are sending from a short list and are left to customize the message yourself. With stock images, an intuitive interface, and helpful tips that pop up as you build your email, it remains a simple but effective tool.

You can add images, banners, text boxes, and more to your heart’s content, supplementing the base design with your own additions as you see fit. As I have already mentioned, it is extremely intuitive and even a little fun to use.

While it’s not prominently displayed as an option, it is possible to import HTML into Mad Mimi to build your campaign by clicking on the arrow on the right side of the Compose button, and selecting it from a pulldown menu.

Sending the campaign requires a minimal amount of information: the lists you want to include, a name, a subject heading, and an email address. You can enable a few extra options at your discretion, like social sharing and link tracking.

Autoresponders, though not immediately accessible, can be turned on in the Add Things section by toggling Drip Campaign. While there’s no true A/B split-testing, Mad Mimi does offer a tool that mimics some (but not all) of its functionality. The Compare button will allow you to the check stats of two different campaigns against each other.

My campaign arrived promptly and managed to clear my spam filters without any problems.

Given how simple and streamlined most of Mad Mimi is, I was expecting its reporting tools to offer a minimal amount of information. While that seems to be the case at first, the aforementioned Compare function raises Mad Mimi’s reporting game by giving you visual representations of engagement rates on multiple campaigns and seeing how they stack up to each other.

You won’t find too much information on industry trends or heat maps or anything like that, though, so you’ll want to integrate Google Analytics if your campaign is data-driven.

Mad Mimi offers a number of different options for resolving technical and sales issues. Like many low-cost SaaS providers, it doesn’t offer technical support by phone. Service tends to be prompt, however. You can reach them by:

People like Mimi. Negative impressions are far and few between, with gripes mostly confined to:

Mad Mimi rates an impressive 4.4 out of 5 stars on G2 crowd, and fares similarly on other user review aggregators like TrustRadius. Users like:

As part of the GoDaddy family of companies, Mad Mimi is protected under the standards of TRUSTe Certified Privacy. You can read more about Mad Mimi’s security and privacy policy here.

Everything has its limits, even Mimi’s insanity. Mad Mimi abides by the dictates of the CAN-SPAM Act, which means you’ll be put on notice if a suspicious number of your emails wind up in Spam folders. You can read more about Mad Mimi’s Anti-Spam Policy here.

While most ESPs will do what they promise (send bulks emails to a list of contacts), many struggle to stand out from the crowd. That’s just not the case with Mad Mimi. With its very distinct style and a unique design, there’s only one Mimi.

The question is whether she’s the one for you. While I really appreciate the expandability and simplicity of this software–not to mention the fact that it’s legitimately fun to use–I can see some of those traits rubbing certain users the wrong way. When you strip it of its shiny coat of paint, Mad Mimi is still a good ESP, but its flaws do become apparent, namely the rigidity and opaqueness of its editor and its conspicuous lack of A/B split-testing.

For beginners or even businesses with modest email marketing campaigns, Mad Mimi is a spectacular way to ease yourself into the world of ESPs. If you’ve been at it longer, however, and you have complex marketing needs, you’re likely to encounter some hard ceilings with regard to Mad Mimi’s functionality.

Give it a try and see what you think. With a free plan and its unique presentation, it’s hard not to be charmed by Mad Mimi.

We really like Benchmark for email marketing and think you will too!

One More Mention For Benchmark!

Try Benchmark Email for free! You have nothing to lose.