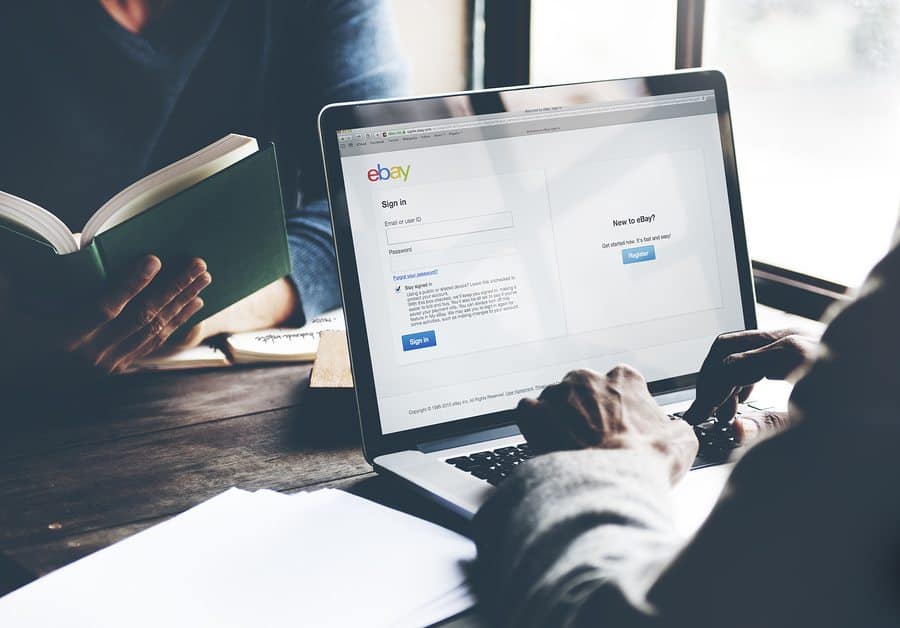 Omnichannel and multichannel are two of the biggest words in eCommerce. And while I often roll my eyes at these buzzwords, I have to admit that multichannel selling is a real, profitable trend.

Studies show that adding a sales channel to your online store can significantly increase revenue. In fact, stores that sell on just one marketplace in addition to their online store experience a 38% increase in revenue. And merchants who sell on two marketplaces bring in 120% more than those with no marketplaces.

Shopify (see our review) is one of the dominant platforms for online sellers, and they’ve recently introduced new ways for merchants to add marketplaces to their system. The Shopify App collection now includes integrations with Amazon, eBay, Facebook, Pinterest, and Messenger. By adding these integrations, sellers can manage their marketplace and website sales in the Shopify dashboard.

In this article, we’ll be discussing two of the most recently integrated marketplaces: Amazon and eBay. We’ll talk about how these integrations work, discuss their merits and flaws, and assess how they may (or may not) help you sell more.

Amazon is an obvious first-step when it comes to marketplace selling. Boasting over 95 million unique visitors each month, Amazon offers merchants huge potential for expanding their customer bases.

In January of this year, Shopify introduced their home-grown Amazon integration. Merchants can now connect Shopify accounts to Amazon with just a few clicks. This connection gives merchants the ability to monitor inventory, sales, and customer interactions from one comprehensive dashboard.

What Does It Take To Integrate?

In order to integrate Amazon with your Shopify account, you just need two things:

Making the connection between Amazon and Shopify is easy. Once you’ve signed up for your Amazon Sellers Account, you can log into your Shopify account, navigate to the “Sales Channels” panel, and click to install the integration. Then you’ll have to follow a few prompts to allow the connection to share information across platforms and confirm developer access for Shopify. 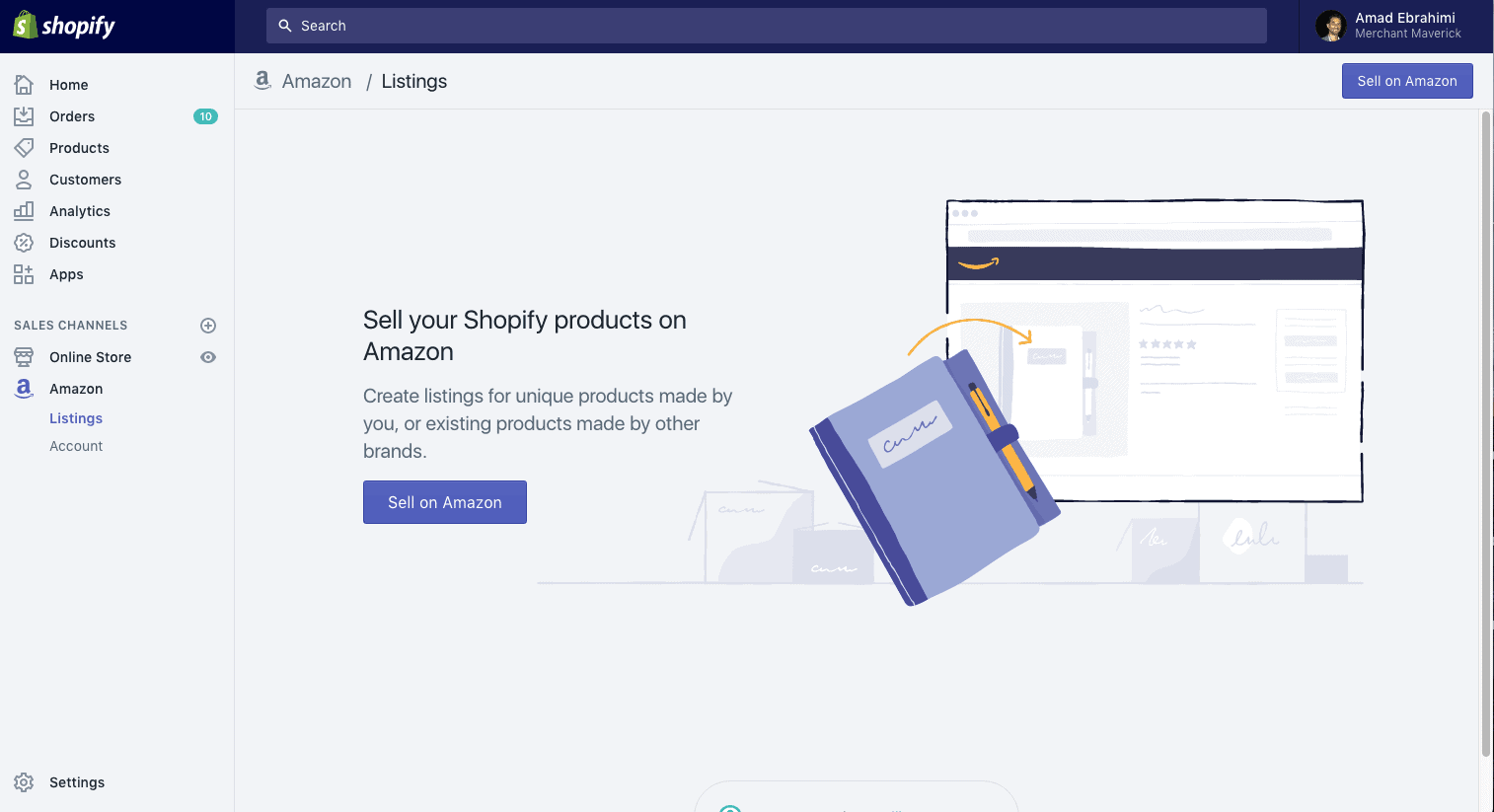 Once that’s accomplished, you’ll be able to sync your products and inventory across both platforms. With a built-in integration like this, it just doesn’t take much to connect your Shopify and Amazon accounts.

How Does This Integration Work?

Not all integrations work the same way. Some only sync inventory or relay order information; others do much more. Here’s what a Shopify-Amazon integration will allow you to do:

During my initial research of the Shopify-Amazon integration, I was hopeful that this would be a simple solution for many merchants. However, as I looked into current user reviews, I started to feel more hesitant.

The Amazon integration, as it is listed in the Shopify App Marketplace, has garnered 77 reviews over the past year with an average rating of 2/5 stars. In order to understand the reasons for that relatively low overall rating, I read quite a few of those 77 reviews. In general, here’s what users have to say about the integration:

Even when I looked at the few five-star reviews, there were signs of trouble. One positive review said that the integration might appear to be broken because changes can take a full 24 hours to update. Good golly! To me, such a long update time is the result of a broken integration.

In my mind, these overwhelmingly negative reviews hold a lot of weight. It’s disheartening to see that so few have had success with the platform. However, if I were to sell on both Amazon and Shopify, I would still consider this integration an option. It is far from ideal and still in need of a lot of work, but it may solve one or two problems at least. Here’s hoping Shopify revisits the integration soon and resolves these issues.

Amazon is clearly one of the most popular marketplaces for US-based merchants, but it isn’t the right platform for everyone. Merchants who sell used or collectible products would perhaps benefit more from an integration with eBay. With more than 169 million active eBay buyers, eBay is packed with potential for expansion.

Fortunately, Shopify and eBay have got sellers’ backs. Just last month, eBay released their new, built-in integration for Shopify with the purpose of simplifying the cross-channel selling experience.

Using this integration, you’ll be able to sync inventory information and process orders on one platform. Keep reading to discover more about this app and learn if you can profit from it.

What Does It Take To Integrate?

It doesn’t take much to integrate eBay and Shopify. Unsurprisingly, you need:

Once again, when you have both of these accounts set up, making the connection is simple. You just have to add the marketplace under your “Sales Channels” tab and then select “Add sales channel” on the following page. You will then be able to click the “Connect” button, which will redirect you to your eBay account where you can complete the connection. 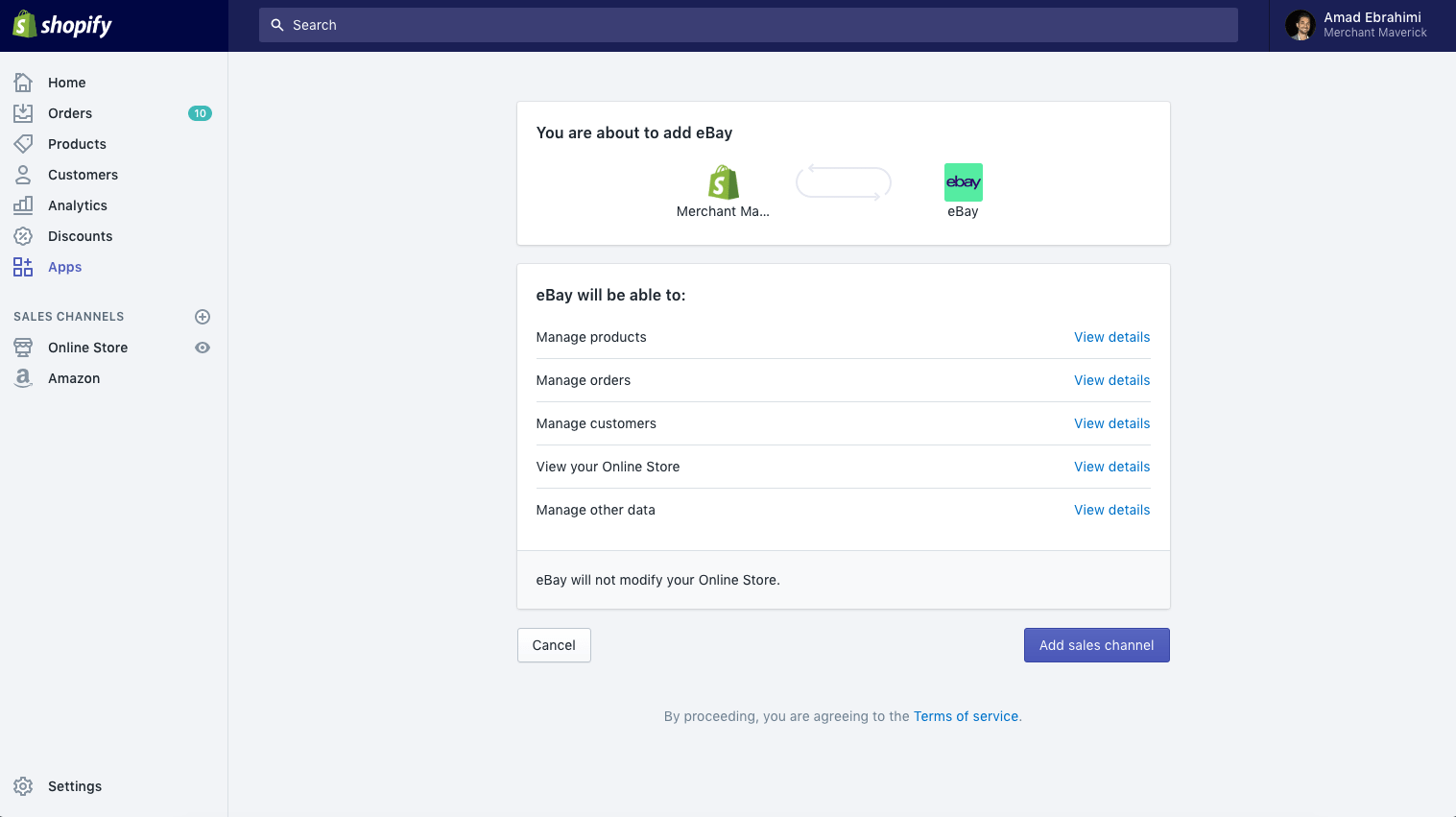 How Does This Integration Work?

eBay’s integration is similar to Amazon’s in many ways, though it seems eBay’s app comes with fewer features. Here’s what they promote about the connection:

Since its release in October, eBay’s integration has received 39 user reviews in Shopify’s marketplace. Many of those reviews are negative, resulting in a 2.5/5 star average.

Confusingly, these reviews include a healthy mix of both 5-star reviews and 1-star reviews. It’s baffling how the user base can be so divided on this one application. Here are a few of the comments I’ve seen recur in those reviews:

The eBay-Shopify integration isn’t perfect. I really wish I could say otherwise, but it seems that Shopify needs to put more work into their marketplace integrations. However, once again, if you need to connect eBay and Shopify, it might be worth a shot. A poor connection is better than no connection, right?

Shopify has excellent intentions in connecting marketplaces to their platform. Unfortunately, execution of this goal has been somewhat lacking so far.

We’re going to keep our eyes on these integrations in the coming months. We hope Shopify and their partners will continue to improve the functionality and dependability of these connections.

Have you used a Shopify marketplace integration? Let us know about it in the comments below.

Liz Hull is a writer for Merchant Maverick. In her three years with Merchant Maverick, she has tested and reviewed over 40 eCommerce platforms and published two ebooks on the topic of online selling. Liz has also been published in Startup Nation and Home Business Magazine Online. Liz has a BA in English and Spanish from George Fox University.

whoah this weblog is fantastic i like reading your posts.
Stay up the good work! You know, many individuals are looking around for this information, you can help them greatly.

Hi my name is Johnnny I am so lost with the buisness online I am looking for help how tu set up online store from the biginning. Is much too tedious and a bit confusing. Can I get some help from a professional person that could help me to set up my on line store?

You can download The Beginner’s Guide to Starting an Online Store (eBook) for free. This guide was created specifically for business owners like you!

Looking to start selling online but aren’t sure where to begin? We can help!

We know that setting up an online business can be a daunting task. So, we’ve created a guide to help ease you into online selling. In this free eBook, we present step-by-step instructions for planning your business approach, choosing an eCommerce software solution, and setting up a user-friendly storefront. And we’ve taken out all of the techy jargon that makes eCommerce so difficult to understand.

In this guide, you’ll learn how to:

Find a market for your products
Register a domain name
Choose the right shopping cart for your business
Organize your website
Set up a preliminary marketing strategy
Understand shipping expenses
Tackle sales tax
And more!

Best of luck to you!

Hi. Thank you for such an informative website. Is the beginners-guide-starting-online-store-ebook still available for free download ? i have been trying the link and its not working

Thank you for the kind words. Visit Starting An Online Store and after entering your email, you should receive it right away. Let us know if you are still experiencing issues.

After experimenting with this for myself, I find that the process is much too tedious and a bit confusing. Both integration tools only give me the option to link EXISTING SHOPIFY LISTINGS. There definitely NEEDS to be a way to import product data and pre-fill a Shopify “New Product” form so minimal manual entry is needed.

Also, eBay inventory syncing is off. When I leave the box blank so that it uses the same quantity as Shopify, it defaults to “2”, which I have no idea why. The Shopify quantity is like 8. This is all very half baked, but I will try to use it to get somewhere.