Top States Most Likely To Survive A Recession In 2022

Midwestern states, led by Nebraska, North Dakota, and Minnesota, may be the best places to sit out a recession thanks to large reserves, good DTI ratios, and relatively low unemployment. 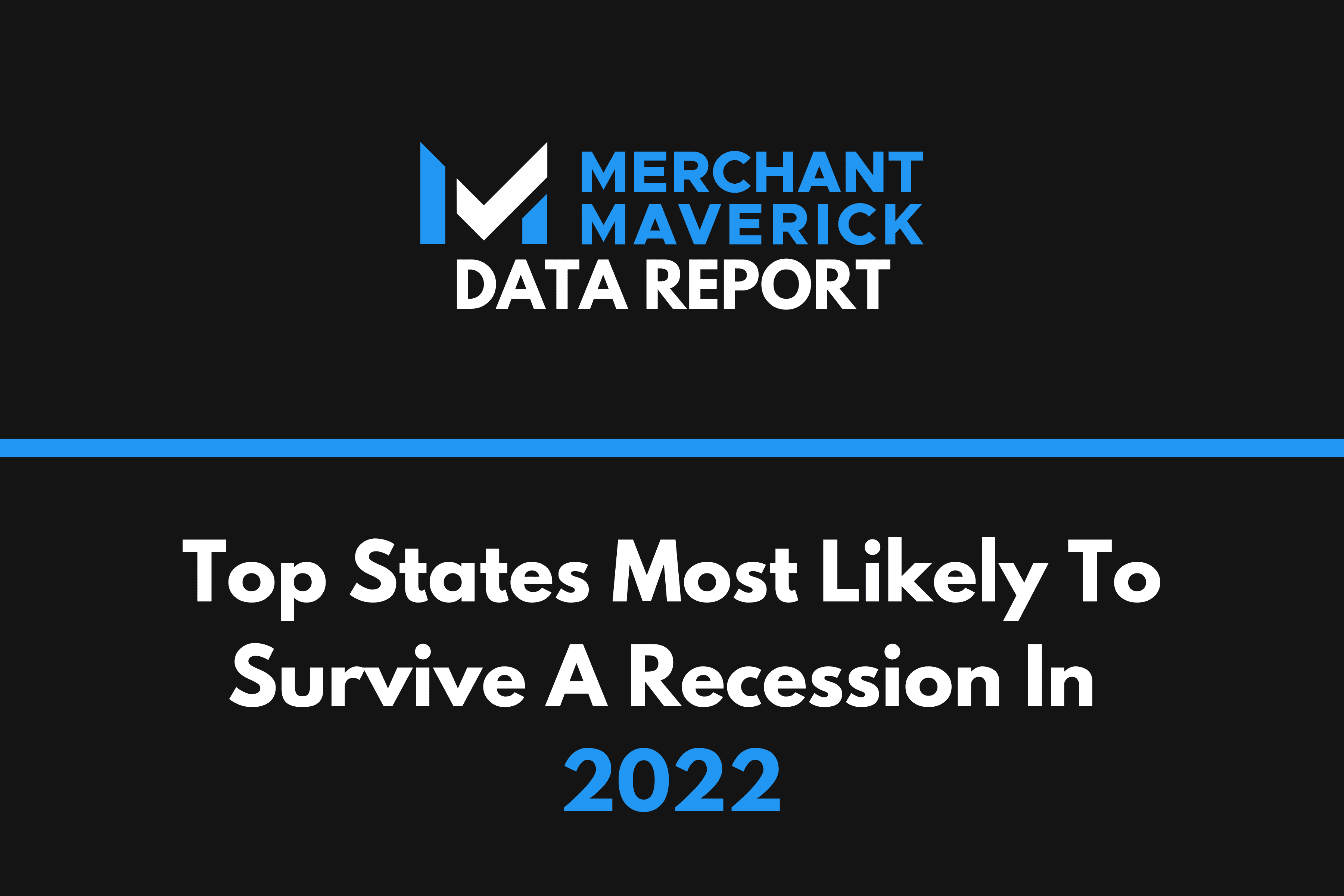 You want to survive the next recession? It may be time to pack your bags for the Upper Midwest. While there’s no guarantee that we’ll see a recession this year, runaway inflation, interest rate hikes, skyrocketing oil prices, and geopolitical turmoil are starting to make one look inevitable.

In Merchant Maverick’s inaugural data report on The Top States Most Likely To Survive A Recession, our analysis found that the states in the best condition to mitigate the effects of a recession aren’t where you might expect. Most of them, as it turns out, are in the Heartland.

We dug into state economic data, selecting key indicators (see methodology below) associated with economic resilience including unemployment rate, unemployment insurance coverage, debt-to-income ratios, and even how the states held up during the Great Recession.

Heading up our list by a respectable margin is Nebraska, followed by North Dakota and Minnesota, respectively.

Though strengths vary from state to state in the region, these states tend to have ample government reserves, favorable debt-to-income rations, and relatively low unemployment rates. They also tended to have experienced positive GPD growth during the Great Recession, a time when many states saw stagnant or negative GPD growth.

There were recession-resistant outliers in other regions.

Delaware and New Jersey come in as the strongest contenders in the Northeast thanks in large part to their affordable housing stock and high GDPs per capita. Despite the well-publicized economic issues in coal country, West Virginia emerges as the most recession-resistant state in the Southeast with a favorable debt-to-income ratio and considerable government reserves. Georgia, the runner-up at No. 14, didn’t quite make the cut. Texas and Oklahoma make strong showings in what otherwise appears to be a very vulnerable Sunbelt.

The Top 10 States Most Likely To Survive The Next Recession

Though Nebraska may not be the first state that comes to mind when discussing economic powerhouses, the Cornhusker State looks to be on solid footing when it comes to surviving the next recession. With ample government reserves (23.1%), a great debt-to-income ratio (0.62), and the lowest unemployment rate in the nation (2.3%), Nebraska sets the pace for the rest of what looks to be a recession-resistant Upper Midwest region.

One more reason to run for cornfields instead of the hills if the economy flatlines: Nebraska weathered the Great Recession better than most other states.

With an overall score of 72.2, the Roughrider state clocks in at #2 on our list, thanks in part to its large government reserves in relation to spending (48.5% or 2nd-highest nationally) and a surprisingly high GDP per capita ($83,338 or 5th-highest nationally). North Dakota also benefits from a low unemployment rate (3.1%), low-income tax rate (2.9%), and affordable housing market (6th most affordable nationwide).

North Dakota's economy, primarily dominated by agriculture, experienced a huge rebound following the Great Recession, with the state's GDP skyrocketing 19.7% from 2007 to 2010 — a bigger jump than any other state.

The “Land of 10,000 Lakes” is not only rich in bodies of water, but also when it comes to GDP per capita ($73,097, or 12th nationwide), thanks to its diversified economy. In fact, many of the top 1,000 publicly traded companies, including Target, 3M, and General Mills, are headquartered in Minnesota. With more than half of its population residing in the Twin Cities metro area, Minnesota also benefits from very low unemployment (3%), high unemployment insurance coverage (56.9%, or 2nd nationwide), and affordable homes—34.5% of residents can afford a home at the median price, which places MN as the 7th most affordable state to buy a house in.

Minnesota actually ranks better than average in every metric we measured, except for the state income tax rate, which is quite high at 9.9%.

Despite being the second-smallest US state in terms of area, this Mid-Atlantic state is well-situated to ride out the next recession. Bolstered by high government reserves (25.9% or 5th-highest nationally) and a state GDP per capita of $81,271 (7th-highest in the nation), Delaware comes in with an overall score of 64.2.

Delaware also has the most affordable housing market of any state in the US—64.2% of households can afford the median home price.

West Virginia isn’t necessarily a state that screams “wealth,” and indeed, WV ranks poorly —47th place— in terms of GDP per capita. However, this Appalachian state actually has a lot going for it when it comes to its economic resilience: large government reserves (3rd highest nationally), low household debt (3rd lowest nationally), and affordable housing (9th most affordable).

West Virginia also bounced back readily from the Great Recession, with GDP rising a healthy 4% from 2007 to 2010. The Mountain state’s economic output has grown considerably since then, too; historically reliant on coal exports, West Virginia has diversified its workforce in recent years to include more healthcare, hospitality, and food services jobs.

The Sooner State hosts a vibrant, varied economy, propelled by petroleum, agriculture, aviation, telecom, and biotech. Home to several Fortune 500 companies, Oklahoma has the reputation of being a very business-friendly state, with a low tax burden (income tax is 5%), low unemployment (2.8%), and high unemployment insurance coverage (54% of the unemployed have received unemployment insurance).

Despite an unimpressive GDP per capita ($52,366 or 44th in the nation), Oklahoma benefits from sizable government reserves (22.3% or 9th-highest nationally) and a relatively low debt-to-income ratio (0.72 or 16th nationally).

Close enough to New York City to benefit from its wealth, but far enough to still have affordable housing, residents of the Garden State still have a solid foundation on which to ride out the next recession. New Jersey’s most impressive metrics are its housing affordability (4th most affordable market in the US) and unemployment coverage (5th in the nation).

Jersey also ranks better than most states in the areas of GDP per capita (13th), debt-to-income ratio (19th), and state government reserves (22nd). Fun fact: New Jersey has the highest number of millionaires per capita in the United States (according to research published in Kiplinger).

From its landmass (268,596 square miles)to its population (29.1 million residents in 2020), everything is bigger in Texas—except for the taxes. The state’s most notable recession-resistant feature is that the state has no income tax—that’s right, Texas’ income tax rate is 0%.

Despite not collecting income tax, the petroleum-rich Lone Star state’s government reserves are above average (15.5%), as is its GDP per capita ($67,958). Texas also benefits from respectably low household debt levels (18th-lowest nationally).

Wisconsin is not only “America’s Dairyland,” but it’s also a land of low household debt (0.66 debt-to-income ratio), low unemployment (3.1%), and high unemployment insurance coverage (38.9%). Its multifaceted economy is reliant on healthcare, tourism, manufacturing, and agriculture—particularly dairy, as you might have guessed.

Though only about a quarter of Wisconsinites can afford to own a home in the state, Wisconsin’s median home price is still well under the national average.

Illinois just barely makes our top ten, thanks to its high GDP per capita ($74,693 – 10th-highest nationally), low debt-to-income ratio (0.67), and high unemployment coverage (46.9% coverage or 7th-highest nationwide). Home to Chicago, the 5th-largest city in the nation, Illinois also ranks surprisingly well in terms of its housing affordability —30.6% of residents can afford the median house price — and has a relatively low state income tax rate of 5%.

Another interesting fact about the “Land of Lincoln” that may help make the state more affordable for low-income residents during times of recession: Illinois has one of the highest minimum wage rates in the country ($12 for non-tipped employees) and it will rise even further to $15 in 2025.

The Bottom 10 States For Surviving The Next Recession

To determine the best and worst states to survive the next recession, we gathered data from eight separate metrics across all 50 US states. For each metric, states were given a score out of 100 based on each state’s rank, with the best-ranked state scoring 100 and the worst-ranked state scoring 0. These individual metric scores were then multiplied by specific weights to achieve an overall score for each state.

Below are the eight metrics we chose, along with the percentage used to calculate the weight of each metric:

Our data was pulled from eight separate sources in total, including The Pew Charitable Trusts, the US Bureau of Economic Analysis, the US Census Bureau, the Federal Reserve Bank of New York, Statista, the US Department of Labor, the US Bureau of Labor Statistics, the National Association of Home Builders, and Tax-Rates.org. Most metrics were calculated using data last updated in 2021 or 2022.