Newks Hot Sauce Blasts Into Business As A Pandemic Pivot

Once a side gig, the pandemic has turned this hot sauce hustle into a full-time job for owner Jake Newcomb. 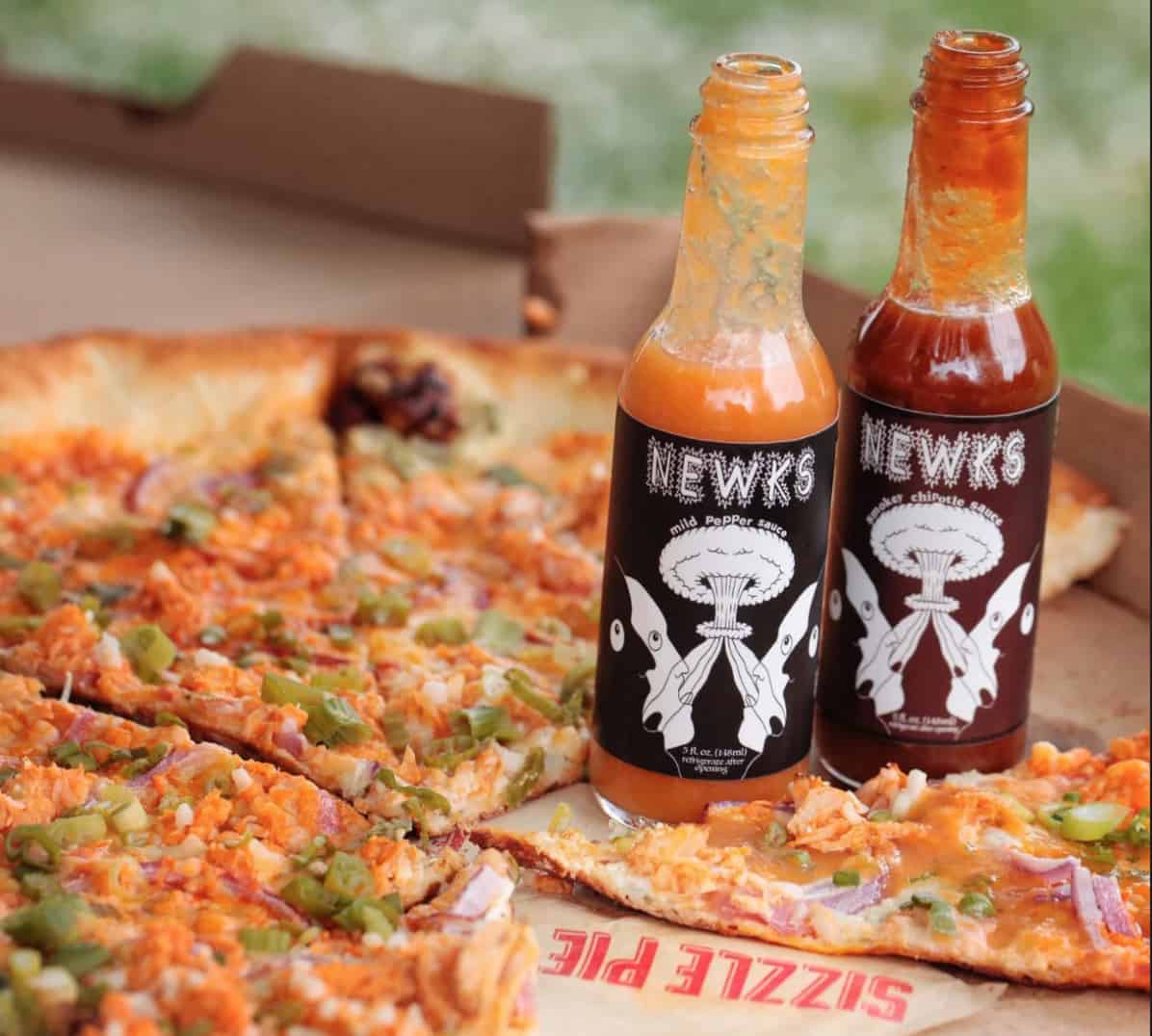 Jake Newcomb’s career as an engineer and sound designer has taken him all over the United States. He has worked on everything from Tony Award-winning plays to freelance jobs with Nike and the BBC, but the New England native had settled in Portland and was working full-time at the Northwest Children’s Theater when the pandemic shuttered shows across the nation.

One month prior, in February 2020, Jake ran a successful Kickstarter campaign as a first step in launching his company — earning the capital needed to get his home licensed as a commercial kitchen, launch an eCommerce site, and receive approval about his recipes from the FDA. His original idea was that he’d run Newks as a side-project to earn extra income between jobs. But locked down and unemployed, Jake knew it was time to take his small business dream and go full-time into the hot sauce world.

“It is pretty fair to say we were born from the pandemic,” Jake says.

Growing A Small Business During A Pandemic

Jake jumped in with both feet into the world of small business.

“I was planning a huge season of freelancing with corporate AV,” Jake says, “but that was all just done.” Jobs for a sound engineer for live gatherings were in short supply. “So, I had nothing to do but work on Newks. There was no work, so I thought, I’m going to treat this and work this business like it’s my 40-hour a week job.”

His first step to gaining sales?

“I applied to every farmer’s market available,” he says.

Not all markets were open to a new hot sauce booth — either due to other hot sauce competition with veteran booths or because of lack of space/openings. But Jake landed three spots across Portland (he’s now up to five locations) and started to plot his sales needs and business trajectory.

With the majority of his sales coming from farmer’s markets, Jake is looking forward to all that the 2021 season will provide, including lifted restrictions on social distancing and vaccinated adults getting out and about more frequently. Last year, the pandemic kept most people indoors (especially in Multnomah County, Oregon, where Newks was based).

“We are now in five farmer’s markets and we are much more established with a bigger fanbase and more collaborations,” Jake says. “Now it’s becoming more of a stable job, even though the income is still hit or miss. One month I’ll make fifty bucks, the next month one thousand. It’s all over the place and that’s a crazy thing to get used to. But I don’t really have any other choices right now — so I’m trying to build the company and I’m trying to make it work.”

Now it’s becoming more of a stable job, even though the income is still hit or miss. One month I’ll make fifty bucks, the next month one thousand. It’s all over the place and that’s a crazy thing to get used to.

Collaborations & Diversification As Keys To Success

One of the marketing strategies Jake began to cultivate early in his business was that of working collaboratively with other local small businesses.

His most lucrative collaboration, however, came from his contributions to Fuego Box, a hot sauce subscription service for “sauce lovers” and “pain seekers.” With two different order batches and the offer to be included in the popular box service, Jake sees the value in tapping right into his prime demographic: Hot sauce lovers on the hunt for something new and fun.

“We collaborated with [Fuego Box] for our hottest sauce,” Jake says. “By utilizing subscription boxes, your product is landing in the hands of thousands of people who don’t know you and love hot sauce.”

His next stop? Possibly music festivals or food expos — as things open up again, opportunities that didn’t exist this past year are coming back as viable sales channels.

“I try not to look too far out when I think about where the business is going because I don’t want to get disappointed. I would love to see us in more stores, even nationally,” Jake says. “From the start, the whole company has been a day-by-day, organic approach. I want to keep it close to home and grow it naturally. For me, I love the marketing and selling aspect the most, and I don’t get as excited about the cooking part as much anymore.”

From the start, the whole company has been a day-by-day, organic approach. I want to keep it close to home and grow it naturally. 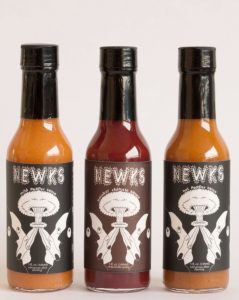 Avoiding Burnout As A One-Man Show

Jake started as a one-man show. Standing in his kitchen one day, looking at some bananas, he thought to himself that he could make something really delicious. At the time of his hot sauce experimentations, fruit and hot sauce were not a common pairing among US brands. But in Mexico, where Jake enjoyed traveling during downtimes between gigs, the hot sauces were varied, fruity, and flavorful.

His banana and habanero became an instant hit with friends, family, and co-workers. He gave them away as gifts, and jokingly called it “Kinda Mild”, but didn’t think there was a way he could sell them. (Even though people always asked.) Jake learned that in Oregon, a residential kitchen can be licensed for commercial use if the home is free of kids and pets. He bought some bottles. Made a label. It was mostly for fun.

There was a definite lure in the idea of making a go at working for himself and seeing what this could be.

“I wouldn’t call myself a workaholic, but I’m from Maine, and there, you are born with a hammer in your hand. The work ethic is really strong. So, when I came out west, I was working my ass off and people would say I was the best AV person ever, but they were unwilling to give me a raise. And I knew that this isn’t doable. And it’s exciting to think about the potential earnings and owning your own company. I did go back and forth about what was right for me, but eventually, I knew I wanted to give [owning a small business] a shot,” Jake says.

I wouldn’t call myself a workaholic, but I’m from Maine, and there, you are born with a hammer in your hand.

With five recipes, all taking up his entire kitchen, Jake did move two of his recipes to a co-packer in Tacoma. He is in a state of transition, as he decides how much to scale and expand. He is also a member of a hot pepper forum online — a conglomerate of hot sauce makers and business owners from around the Pacific Northwest — and despite the potential for the group to view each other as competition, Jake has found the community beyond welcoming and helpful.

Even with that help, the day-to-day can be exhausting. Jake is still cooking three of his sauce recipes, handling all of shipping/receiving/invoicing, updating his website and socials, and building his partnerships with local retailers — all while packing up and moving to the farmer’s markets.

“I always feel like I’m on the cusp of burning out, but I don’t want that to be my story,” he says. “I want to enjoy it and keep it fun. Even though I know I’m going to be exhausted by the end of the season, and maybe it isn’t sustainable, but I’m going to try.”

But he does have advice for those on the verge of starting their own business.

On Shopify: “I’m pretty happy with Shopify. There are a lot of things you can do with it and I’m still learning, but there are a few limitations I’ve run into as a hot sauce maker. I have a three-bottle bundle, you save money if you buy three, but there’s no way to have a drop-down menu to select which three. Squarespace has that feature, but I didn’t find the software options as beefy. Shopify makes it easy to add apps, and I just started sending out regular emails through a Shopify app.”

On Kickstarter:  “I absolutely recommend Kickstarter for businesses just starting out. It takes a little bit of vulnerability to put yourself out there because I didn’t want to ask for money outright. The only trick I would suggest is to make sure the amount you are seeking is achievable. If you don’t reach your goal, you don’t get anything.”

On Customer Satisfaction: “The funny thing about a hot sauce company is that you create something that you think will be hot, and you give it to five people, and some of them think it’s incredibly spicy and others think there are no peppers in there. Heat is subjective and hard to figure out. You can’t satisfy everyone. That’s a big thing I had to learn.”

Heat is subjective and hard to figure out. You can’t satisfy everyone. That’s a big thing I had to learn.

Jake is hitting up those Portland markets with his hope to make Newks a house name in hot sauce. Local residents can find his farmer’s market schedule on his website or check out the grocery stores that carry Newks across the nation.