The 10 U.S. States Where Inflation Is Hitting Consumers The Hardest

Thanks to an influx of new residents and increased strain on the housing market, Southern States are feeling the most pain from inflation, while the Northeast is faring surprisingly well. 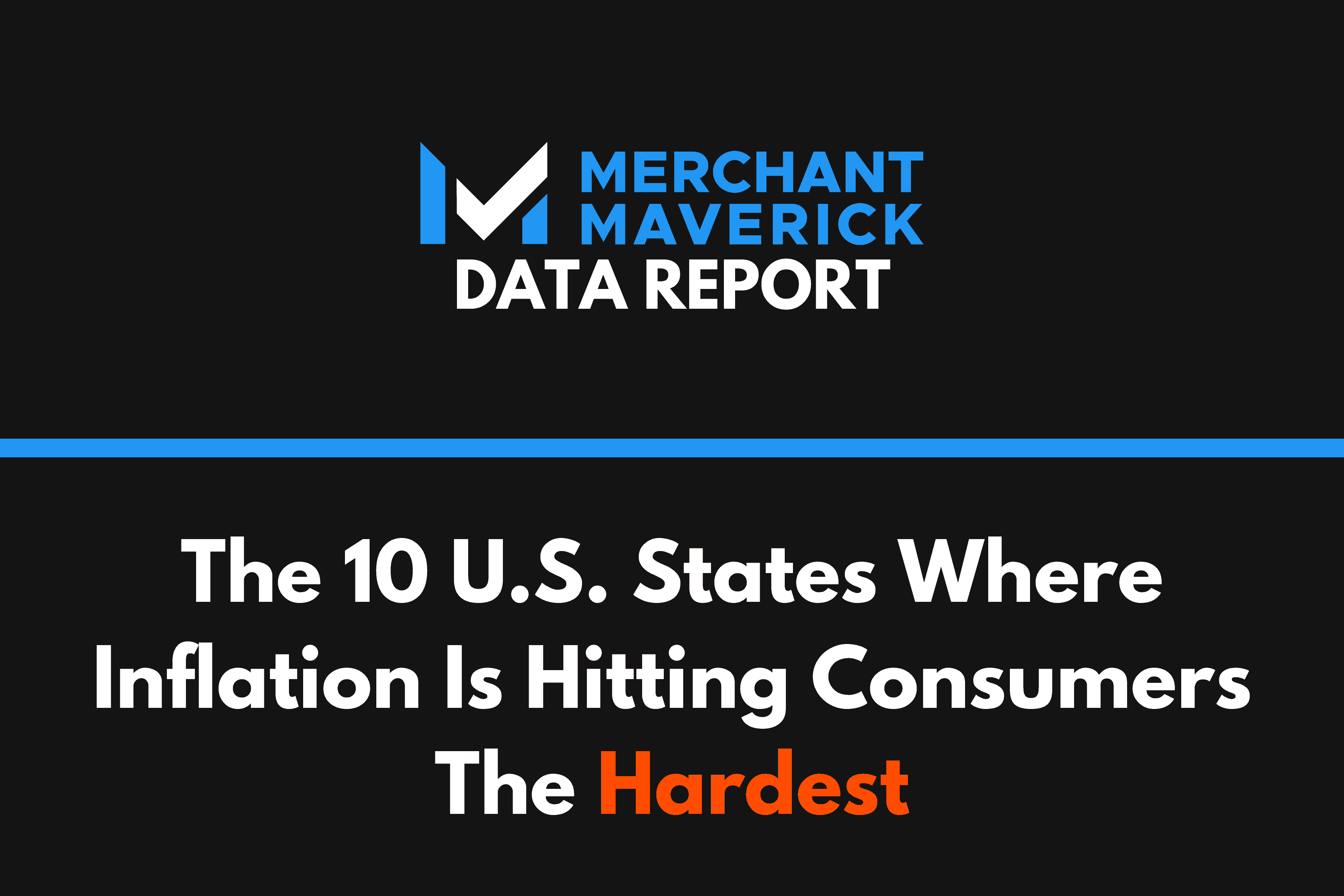 Inflation is taking a big bite out of Americans’ purchasing power, but residents of Southern states may be feeling the hit to their wallets more intensely than elsewhere.

Merchant Maverick’s inaugural report, The 10 U.S. States Where Inflation Is Hitting Consumers The Hardest, looks not only at where inflation is rising the fastest, but how much-existing factors within a given state may contribute to the stress on a household budget.

The South is likely a victim of its own success, with key metropolitan areas like Atlanta, Austin, and Tampa absorbing an influx of new residents, predominantly from the Northeast and West Coast. This has generated enhanced demand, particularly for housing, within the region, and has helped to boost prices beyond the national average. This may be particularly hard on existing regional residents, especially in hot markets like Florida, who tend to have lower household incomes than the new arrivals.

Ironically, those left behind in the Northeast appear to be experiencing lower pricing pressures for most goods and services than elsewhere in the country. Despite being home to generally higher prices pre-pandemic, the lower rate of inflation and higher household incomes are helping to insulate New England, New Jersey, and Pennsylvania from some of the worst effects.

Those worried about the possibility of a looming recession may be interested to hear that a few of the Top States Most Likely To Survive A Recession In 2022 are also among the states we found to be least affected by inflation. These include Nebraska, Wisconsin, and New Jersey.

To rank the states, we examined the following metrics (see our methodology below):

The 10 States Most Impacted By Inflation

Burdened by the highest sales tax rate in the nation (tied with Tennessee) and one of the lowest median household incomes ($51,707, the lowest in the nation after Mississippi), the Bayou State has suffered dearly under the current inflationary economic circumstances.

To make matters even worse for Louisiana, the US South has seen some of the steepest price hikes nationwide. Transportation costs in the region rose 20.6% in the 12 months ending April 2022 compared to the previous year. Housing costs rose 7% – more than any other region of the US (with the exception of Maryland and Delaware, where housing also rose 7%).

Florida’s high cost of living relative to other states (regional price parity ranks 36th nationwide, which means it’s higher than that of 35 other states), substantial sales tax (7.01%, 28th nationwide or higher than 27 other states), and low median income ($58,368, putting it in the poorest 10 states) all have the Sunshine State reeling from inflation. Along with its other southern neighbors, Florida is also suffering from a sharp rise in living expenses, including housing, transportation, apparel, and others.

South Florida has been especially hard-hit by inflation and particularly housing and gas prices, with cities like Tampa and Miami experiencing drastically higher prices this year over last.

At 9.55%, Tennessee has the highest sales tax in the country (tied with Louisiana), coupled with one of the lowest median incomes ($56,627, 43rd in the US). With costs spiking in every category, from food and beverage to recreation, household budgets in the Volunteer State are getting squeezed from all angles.

Housing and utility costs in the desirable Nashville region have been particularly impacted by inflationary pressures, which have only intensified the general upward trend of housing in the region over the past decade. The Wall Street Journal recently reported that Nashville housing prices have nearly doubled over the past 10 years due to an influx of nearly 400,000 new residents.

Georgia is yet another southern state suffering from inflation, as rising prices, low incomes, and high taxes leave precious little wiggle room in household budgets. Georgia’s median household income is just $56,628 (42nd highest in the country) and sales taxes add another 7.35% to every purchase. Meanwhile, the cost of expenses like housing, medical care, and apparel have all risen precipitously across the US south.

Metro areas like Atlanta are seeing especially high inflation, as population increases in recent years have led to high demand for supplies like gas and food, while supply chain woes have rendered these necessities scarcer than usual.

Again, costs are spiking across the entire US south, and Arkansas is no exception. The Natural State’s residents were already burdened by paltry household incomes (median is $54,539, higher than only 4 other states) and sky-high sales taxes (9.47%, lower only than Louisiana and Tennessee), so families are feeling the impact of higher costs in the worst way.

Local headlines in Arkansas have blamed out-of-control inflation in the state for everything from dwindling food bank supplies to a 20% Y-O-Y drop in Arkansas Lottery revenues (though the end of COVID stimulus programs is also a factor).

Texas added more people to its population (310,288) than any other state between 2020-2021. Those new residents are, unfortunately, feeling the weight of the national inflation trend. As is the case with its sister Southern states, the rising costs of transportation and housing are hitting wallets especially hard, the flames fanned hotter by the state’s growing demand.

While the Lone Star State benefits from regionally high median household income (26th), its relatively high sales taxes (37th) and regional price parity (34th) may be amplifying the pain for the average Texan.

Rural Alabama has been feeling the squeeze from the increases in the prices of fuel and fertilizer, which is also hitting food prices farther down the line. The impact on the price of these staples has had a devastating effect on places like Barbour County, which has a median household income 32.8% lower than the state average.

Mississippians are feeling the regionally-higher burden of fuel and food costs, especially in counties like Yalobusha, which has a median household income 36.2% lower than the national average and where 18% of households less than $15,000.

When it comes to state-level factors, the Magnolia State’s metrics are very polarized. Mississippi is home to both the cheapest goods and services in the nation (1st) and the lowest median household income (50th). Mississippi fares a little better than some of its southern neighbors, thanks to its sales tax rate (29th), which isn’t too far off from the U.S. average.

Bringing up the rear of our most affected states is the Palmetto State. One of the ironies of the current inflation crisis is that many of the cities West Coasters and Northeasterners have fled to for a lower cost of living are now seeing higher relative inflation due to increased demand. This includes cities like Charleston, which has seen housing costs balloon nearly twice as much as the national average.

Even though inflation is high in South Carolina, its appeal as an affordable state is justified in terms of regional price parity (10th). Median household income is on the low side of average (33rd), which puts South Carolinians in a better position to absorb costs than some of its neighbors. Likewise, state sales taxes are on the high side of average (33rd), but lower than many of its regional peers.

Learn more about how inflation is affecting businesses and what you can do about it in this complete guide filled with practical business tips you can implement to help weather inflation.

The 10 States Least Impacted By Inflation

To determine the impact of inflation by state, we gathered data from 10 separate metrics. For each metric, states were given a score out of 100 based on each state’s rank, with the best-ranked state scoring 100 and the worst-ranked state scoring 0. These individual metric scores were then multiplied by specific weights to achieve an overall score for each state.