Colorado takes the top spot for the third year in a row! Keep on reading to find out what new states joined our list as the best place for women-led startups. 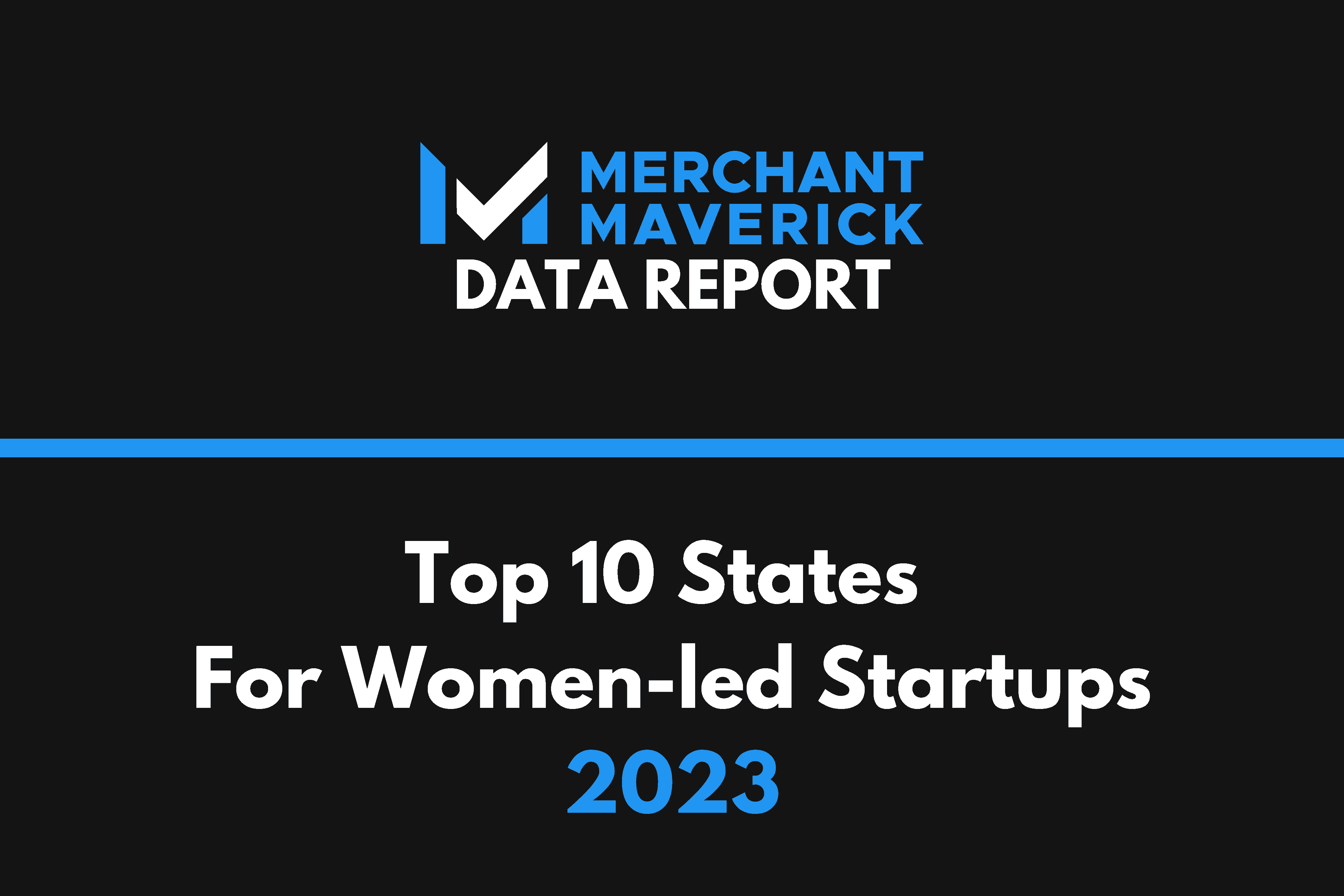 2022 would have been the best year ever for venture capital funding for businesses founded by women had 2021 not set the bar so high. Despite tightening interest rates, companies founded or co-founded by women netted over $36.3 billion for the year ending in October, down from 2021’s $42.6 billion.

While venture capital is still largely clustered in big cities in California, New York, and Massachusetts, money is traveling to women in the Midwest and Mountain regions. Chicago’s healthy venture capital scene propelled Illinois into Merchant Maverick’s 10 Best States For Women-Led Startups in 2023 for the first time. Meanwhile, women entrepreneurs in Wyoming are taking charge despite a challenging business climate.

Compared to our findings in last year’s report, the locus of female startup energy moved somewhat west- and southward this year. Many of last year’s Top 10 made this list this year as well, including Colorado (our No.1 state for the third year in a row), Texas, Florida, Washington, California, Virginia, and Arizona. They were joined by North Carolina, Wyoming, and Illinois.

At the same time, the Northeast lost its two representatives on our list (Maryland and Massachusetts), with New York leading the region at No. 12. While venture capital investment remains strong in the region, it appears to be facing some headwinds when it comes to unemployment and startup survival rates. While reports of the region’s demise may be greatly exaggerated, there could be trouble ahead for the Northeast when it comes to retaining its footing in the post-COVID world.

To accurately gauge the best states for women-led startups, we considered an array of gender-specific metrics:

Colorado maintains its position as the best state for women-led startups for the third year in a row and has even improved its overall score from last year (75.2). While it doesn't lead in any one metric, Colorado remains the only state to rank in the top 10 for all five gender-specific metrics. With $3.3 billion allocated to women-led startups in the last five years (4th), 2.5% of Colorado women owning their own firm (2nd), and strong average earnings for women CEOs (4th), the Centennial state is looking pretty secure at the top of the heap.

Washington had moved down our list to the number four position but has regained its second-place standing. One reason for the bump is that the Evergreen State now holds the number one spot for business survival rate (89.2), which is a huge shift from its previous position of last place. Washington is also tied with Texas for its lack of state income tax (1st) and ranks fifth with its $4.4 billion in venture capital investments toward women-led startups — a vast improvement. The state is also holding steady, with 29.5% of businesses owned by women (5th). Those reasons keep the state at the top of the pack despite Washington's moderately high unemployment rate (31st).

California improved its position on our list significantly this year, largely on the strength of its venture capital scene. Indeed, Californians have received 47% of all venture capital allotted to women in the US over the past five years, a total of $74.9 billion (1st). Women entrepreneurs in California also benefit from strong earnings (6th) and a relatively high business survival rate after one year at 82.6% (9th). Despite the potentially punishing taxes (50th) and high unemployment rate (36th), California remains a powerhouse when it comes to entrepreneurship.

The Grand Canyon State moved up five spaces this year primarily due to ranking third in women-led businesses (30%). Like years past, Arizona shines for its consistency — ranking no lower than the top 20 for any metric other than unemployment (34th). In Arizona, 20.41% of employees are led by a woman (15th), and the state ranks 16th in the nation for average income ($52,972). One thing to note: While Arizona is ranked 17th for its investment into women-led startups over the past five years, its venture capital investments were significantly lower this year than in years past. If that trend continues, it could be difficult for Arizona to remain a top contender.

The Lone Star State has fallen slightly from its lofty third-place position in 2022 to a still-respectable No. 5. Texas boasts the strongest venture capital scene for women outside of California and the Northeast, with $6.5 billion invested in the last five years (4th). Additionally, women solely lead 22.11% of all employees working for a firm (5th) in Texas. While high-earners will enjoy Texas's lack of income tax (tied for 1st), the state's high unemployment rate (36th) and relatively low rate of female business ownership (29th) are keeping it from the Top 3.

A top state for women-led businesses in 2021, Virginia slipped last year and was nearly pushed out of the top 10. However, this year the state finds itself right back in the middle of the pack. Virginia's business survival rate is still fairly low at 79.5% (36th), but the state has a low unemployment rate (9th) and a decent income (12th). It is also in the top ten (8th) for percentages of businesses owned by women, and 20.67% of employees are led by women (12th). Old Dominion also ranks 14th in investments, with a little over one billion dollars going to women-led startups.

Crashing into the top 10 is dark horse Wyoming. While it's a relatively unforgiving place to do business, with just 76.6% of startups surviving after the first year (48th), the Equality State lives up to its name in a lot of ways. Wyoming leads the nation in the percentage of women who own a business at 2.61% (1st), and a quarter of all employees in the state are led by a woman (2nd). Women entrepreneurs who can survive the rugged business climate and limited capital availability — $101 million over the last five years (34th) will, of course, appreciate the lack of state income tax (tied for 1st).

Florida lost five spaces this year due to increased competition, not because any of its metrics did poorly. As a matter of fact, Florida's overall score increased this year due to its solid overall percentage of women who own businesses (3rd), its commitment to venture capital investment (7th), its low unemployment (9th), and its tie for the lowest tax rate (1st). Where the Sunshine State could improve is in its overall income (ranking 37th) and its middle-of-the-pack business survival rate (29th).

North Carolina has established a toe-hold on the Top 10 list this year, shooting up eight places. While the Tar Heel state doesn't dominate any one metric, it makes a respectable showing in many. For example, 28.2% of all employer firms in the state are led solely by women (9th), and 20.82% of employees are led solely by a woman (11th). North Carolina also lacks any major weaknesses among the metrics we measured, though it does fall into the bottom half of states when it comes to average income (29th) and unemployment (31st).

Illinois is moving on up our list — the Prarie State improved its ranking by thirteen spots by drastically improving its business success rate (2nd versus 22nd in 2022) and making gains in venture capital investments (9th). It is also still in the top 20 for average income (14th) despite its significantly high unemployment rate (tied for last with Nevada). While the state is still ranking in the middle for women who own businesses (23rd) and the number of employees led by a woman (24th), the improvements show that Illinois is shifting in the right direction.

The Worst 10 States For Women-Led Startups In 2023

41. Nebraska (35.9 Overall Score): A scarcity of capital (45th) and a poor survival rate for startups (49th) have sent the Cornhusker State tumbling down to the bottom ten despite relatively high business ownership among women (9th).

43. South Carolina (34.7): South Carolina's relatively high rate of startup survival (12th) isn't enough to overcome its low rate of business ownership among women (40th) or the fact that women lead a mere 14.84% of employees in the Palmetto State.

44. North Dakota (34.3): In Roughrider Country, the 0% invested in women-led businesses lands them at the bottom of the entire nation (50th). While North Dakota does enjoy a low unemployment rate (3rd), its income (45th) is near the bottom, and businesses don't have a healthy survival rate (41st).

45. Arkansas (34.1): The only metric for which Arkansas landed in the top 50% of states was in the percentage of women who own a business firm (22nd), with income (47th) and capital investment (46th) particularly lacking.

48. Tennessee (30.2): Tennessee ranks in the middle of the pack for investments (25th) and business survival rate (28th) but ranks 50th for the percentage of businesses owned by a woman and 48th for employers being led by a woman (14.46%).

49. Alabama (28.9): Low unemployment (9th) is a bright spot in an otherwise difficult environment for women entrepreneurs in Alabama, which lags in ownership amongst women (43rd), income (42nd), and one-year startup survival rates (42nd).

50. Mississippi (24.1): The Hospitality State is not a very hospitable place to be a woman starting a business. While businesses that do make a go of it find a healthy survival rate (10th), Mississippi is at the bottom of most other metrics. It is 47th for firms led by women, dead last (50th) for employers led by a woman, and 48th for investment into women-led businesses.

Map View Of All 50 States

Below are the eight metrics we chose, along with the percentage used to calculate each weight: