Best States For Black Entrepreneurs In 2022

While Black entrepreneurship is soaring nationwide, our study shows that states in the Mid-Atlantic pocket of Virginia, Maryland, and Delaware provide the best environment for Black businesses to thrive. 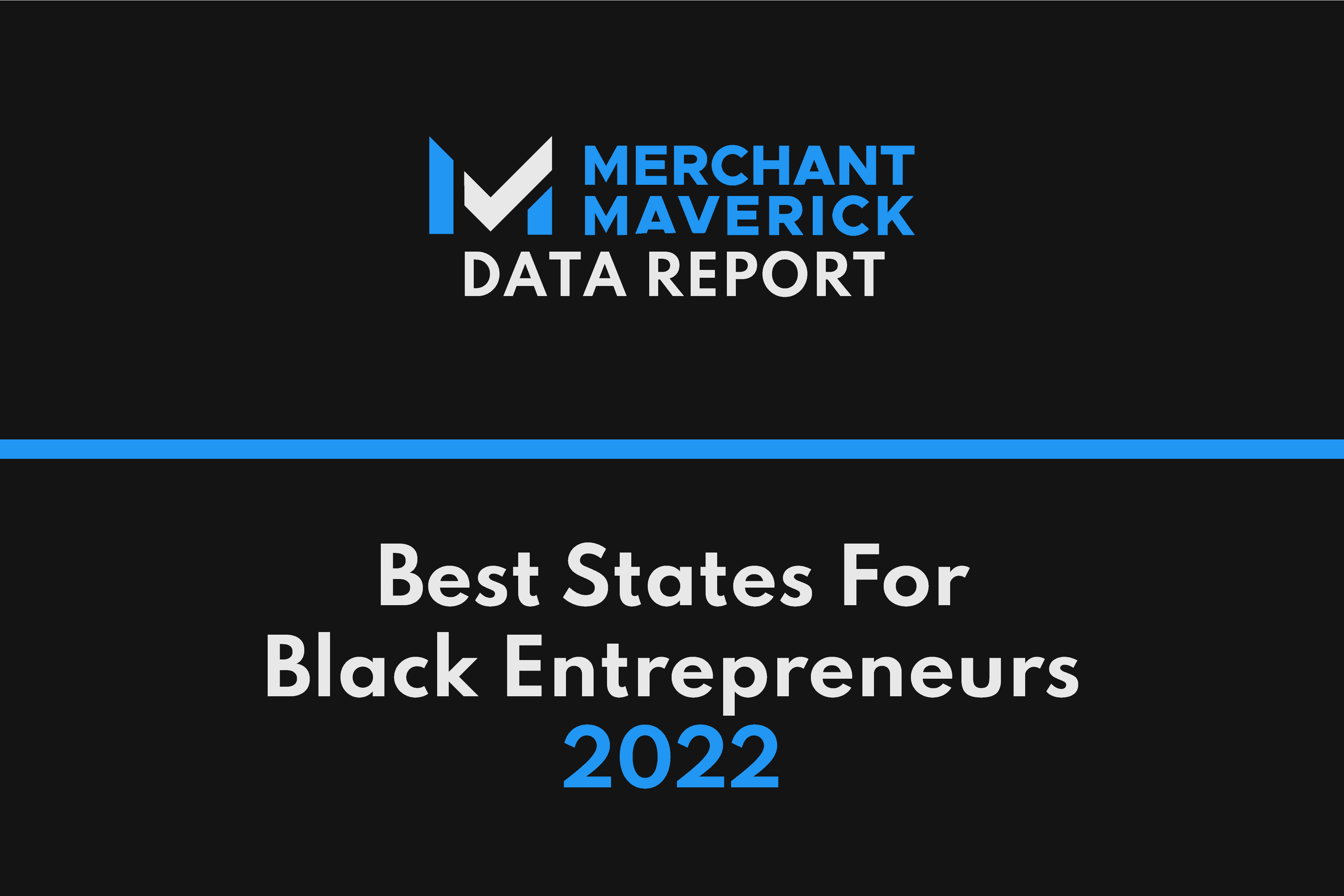 Despite persisting societal barriers and a global pandemic, Black entrepreneurship is significantly on the rise. Black-owned businesses grew an astonishing 38% between February 2020 and August 2021, according to UC Santa Cruz research, even while White and Asian businesses fell by 3% and 2%, respectively. Beyond that, the Kauffman Foundation found that more Black Americans started businesses during COVID-riddled 2020 than in any of the previous 25 years.

However, Black-owned businesses make up just 2.3% of the employer businesses in the US, per Merchant Maverick’s research of Census Bureau data, a far cry from the 14.2% of the population Black Americans represent. Funding gaps only highlight this discrepancy. The Federal Reserve’s 2021 Small Business Credit Survey shows that just 13% of Black businesses received the funding they sought, a number that pales in comparison to the 40% of White businesses that successfully received funding.

Because of America’s size and diversity, business success rates can vary heavily depending on location. To understand where in the US Black entrepreneurs are best positioned to succeed, Merchant Maverick set out to rank every state based on an array of metrics. We gave the heaviest weights to race-specific indicators of success for each state:

To glean a wider economic view of each state, we also factored in several general metrics: cost-of-living, unemployment rate, and state income rate.

The Top 10 States For Black Entrepreneurs In 2022

Thanks to a trio of top five metrics, Virginia ranks soundly in the No. 1 spot. Black-run businesses employ 2.18% of the Old Dominion’s workforce (2nd nationally), and there are 755 Black-owned employer businesses per 1 million people (3rd nationally). Black-owned businesses also average an annual payroll of $437K, which ranks 5th overall. The state previously fared well in some of our other data reports — Virginia finished as the 4th-best state for Black women-owned businesses, and it ranked 10th in our recent best states for women-led startup report. In an effort to grow local minority-run businesses and encourage contracts with those businesses, the Virginia state government operates a directory of all certified small businesses within the state.

With Black residents comprising 31% of the population, Maryland has the highest percentage of Black residents of any state on the East Coast, and the 4th-highest in the nation. As such, it shouldn’t be much of a surprise that Maryland has many Black business owners. The Free State ranks 1st nationally for the most Black-owned businesses per 1 million people (1,213), and also ranks 1st in percent of the workforce employed by Black-owned businesses (3.49%). Black-owned Maryland businesses additionally average a very respectable annual payroll of $465K, which is the 4th-highest in the nation. The state government offers several tools for minority business owners, including funding, small business certifications, and assistance programs.

While no metric clearly stands out, Texas ranks highly thanks to consistency. Black entrepreneurs may find it profitable to start a business in the Lone Star State — Black business owners average an annual income of $64,240 (10th overall) and Black-run businesses in the state average an annual payroll of $337K (17th overall). All of this cash can go further in Texas because the state lacks income tax. Resources available to local Black businesses include the Texas Black Expo and the Dallas Black Chamber of Commerce, both of which are organizations that aim to assist underserved businesses.

With Black residents representing only 12.1% of the state’s population, Nevada’s inclusion on this list might be somewhat surprising. However, Nevada is a very business-friendly state, and this applies to small, minority-owned businesses as much as it does large corporations. In fact, according to the SBA, firms with fewer than 100 employees have the largest share of business ownership in Nevada. One of the factors that makes Nevada “open for business” is that it is one of the few states with no state income tax. Nevada also boasts the highest annual payroll of Black-owned businesses in the nation, at $586K.

In North Carolina, 22.5% of residents are Black, and these residents of the Tar Heel State are well-represented among business owners. North Carolina ranks 3rd in the nation when it comes to percent of the workforce employed by Black-owned businesses, and 8th for the number of Black-owned businesses per 1 million people (610). North Carolina features other desirable qualities, such as its moderate climate and affordable cost of living (13th-lowest nationally), making the state a highly attractive place to live and start a business. Minority businesses in North Carolina are supported by ResilNC, a nonprofit that helps organize the state’s annual Black Business Forum.

As the lone top 10 state located fully in the northern half of the US, Ohio performs solidly across a range of metrics. The Buckeye State ranks particularly well for the share of its workforce employed at Black-owned businesses (1.47%, or 8th overall) and for the average annual payroll of those businesses ($358K, which ranks 13th). And, with a cost-of-living index of 91.7 (12th-best nationally), Ohio is affordable to most entrepreneurs. In the past year, the state government has set aside funds to enable minority and women-run businesses to grow within Ohio.

Despite a smaller-than average Black population, New Mexico is very lucrative for Black entrepreneurs. In particular, the Land of Enchantment features the 2nd-best average payroll of Black-owned businesses at $560K per year. Besides payroll, Black businesses owners in the state average an income of $82,101, which is good for 3rd overall. When coupling those numbers with the 10th-best cost-of-living index in the US, New Mexico is a very fertile state for Black-run businesses. The New Mexico Black Leadership Council operates a list of Black-owned businesses in the state to make it easier for customers to support their local Black-run businesses.

With 928 Black-owned employer businesses per 1 million people, Georgia has the 2nd-most Black-owned businesses per capita in the country. The Peach State’s ranking gets an additional boost by having 1.68% of its workforce employed at Black-owned businesses, which ranks 5th nationally. With one-third of the state’s population identifying as Black, it’s no surprise that Georgia snagged a top 10 spot. Also, Atlanta is home to numerous incubator programs, entrepreneurship networking resources, and funding opportunities targeted at underrepresented entrepreneurs.

Alabama has one of the highest Black populations in the United States, with Black residents comprising 25.7% of the population. Alabama has a much higher-than-average number of Black-owned businesses per 1 million people, at 436 (13th-highest nationally). The same goes for the proportion of Alabama’s workforce that is employed by Black-owned businesses — 1.23%, or 10th highest nationwide. Black business owners in Alabama do not pull a particularly high annual income – $45,775 on average, or 38th in the nation — but this is countered by the Yellowhammer State’s very low cost of living index of 89.3 (4th-lowest overall). The state’s Black Chamber of Commerce helps local Black-owned businesses in numerous ways, including via funding assistance, events, and education.

Map View Of All States

Complete Ranking Of All States

These four metrics equally accounted for 75% of the overall score:

And the next three metrics equally accounted for 25% of the overall score:

Metrics were pulled from multiple sources, including the US Census Bureau’s 2020 Annual Business Survey, the US Census Bureau’s 2019 5-year American Community Survey, the US Bureau of Economic Analysis, the US Bureau of Labor Statistics, and Tax-Rates.org. In some cases, earlier versions of the Annual Business Survey were used for states with limited survey data.

Note that due to a lack of sufficient survey data, Connecticut, Maine, and Wyoming were not included in the final ranking.

Find out today with a free, no-commitment savings analysis from a trusted industry pro at Dharma Merchant Services.